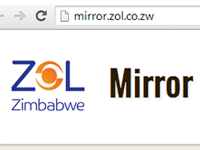 As we step into a new year, I can’t help but look back on the current year and wonder that there has been a lot of talk in the broadband/internet side of things locally but not a great amount actually done about it.

Now I know that sounds very negative, ISP’s have innovated quite a bit this past year, from uMax starting things by changing the game somewhat with fixed (non 3g) internet with their 20gigs for $75 plan and free modem, then ZOL blew that out of the park by saying that all their packages would no longer have a bandwidth caps forcing other providers like YoAfrica to follow suit. I’m still waiting for TelOne to also do similar across there packages as the last “big” ISP in Zimbabwe that’s yet to update/improve their packages (unlikely I know).

That’s all great in terms of internet access, but with international fibre links often having speed (or sometimes just being plain offline) issues what’s all that speed useful for if there isn’t a good amount of local content to take advantage of all that untapped speed?

Last year TechZim held its inaugural Broadband Forum at Cresta lodge, Harare, again there was lots of talk about what needs to be done, especially around the area of local content, unfortunately there hasn’t been a massive amount of take up on some of the ideas, except for at least 1 item.

Just before the event, Techzim asked via Facebook “If you had unlimited broadband at unlimited speeds, what would you use it for?” I replied somewhat candidly with,  “I’d show companies like TelOne how to run an ISP properly and start a local Datacentre for people to host servers/websites”

My idea really was about getting local content, hosted locally instead of in, say, SA, UK or even worse, the US. I was getting at hosting open source mirrors so that people could save on bandwidth costs, because this was just before most providers went “unlimited” on non-local content.

David Behr the CEO of ZOL and a director of Liquid Telecom took me up on that offer and over the course of the last few months we have been working together to bring the old ZOL mirror site up to date. The great news is, we have just pushed it all live and we are initially mirroring arguably the 3 largest Linux Operating Systems with Debian, Ubuntu and CentOS and also a few other smaller mirrors.

ZOL and myself have also been working to get the local mirror registered with the OS foundations so that for Ubuntu users in particular, you won’t even have to do anything to be pointed at the local mirror. What this means is that your updates of Ubuntu, Debian or CentOS will be faster and a lot less likely to be impacted by international fibre issues which commonly affect things – obviously if you’re still only paying for 256kbps on TelOne or similar your still only going to get that speed!

If you want to see exactly what’s mirrored, then do go and have a look at http://mirror.zol.co.zw

If you have any specific requests for items for the mirror, as long as we can legally and technically mirror them, we will try and do our best to get them on there as well, so drop a request in the comments.

This article is a guest post by Anthony Somerset. Anthony is a freelance server guru, through his company Somerset Technical Solutions. Anthony is experienced in all things Linux, Windows and Mac and likes to make websites like TechZim fly