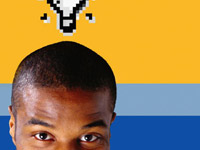 The foundational principle of Copyright Law is that it protects the expression of ideas and not the ideas themselves as such. This is easy enough to say but is often difficult to understand in practice as the line between ideas and their expression is often blurred; leading to many creators of ideas suffering loss when their ideas are taken and they find themselves without the legal remedies they may have believed that they were entitled to.  To avoid finding yourself in such a predicament; the following tale will try to explain this crucial difference:

Say a certain TechZim reader called Quagmire comes up with the brilliant startup idea of creating software that does payroll calculations in a way that has never in all human existence been done or even thought possible. He thinks about it all day and all night; but somehow never gets the time to sit down and work on the necessary coding to bring his idea to life; although it is very clear in his head exactly how it will work. So excited about his idea that he absolutely must tell someone about it, he shares the idea with his friend Sheila; who happens to be a tech whiz too. Sheila is inspired but unlike Quagmire; she actually takes time to create the source and object codes that will run the software; pitches the startup to Microsoft and gladly retires to a Pacific island by the age of 30.

Could Quagmire sue Sheila for copyright infringement in such a situation? No he couldn’t; because copyright law does not protect the idea of having software that will do payroll calculations in a certain way; what is protected is the particular expression of this idea – the gobbledygook in the source and object codes that Sheila came up with. As a result; Sheila has copyright over the source and object codes for the payroll software; but never over the idea of having software that does payroll calculations; anyone is free to come up with their own code that does this. Of course; anyone could also independently come up with the very same code as Sheila did; as long as they can show that they did not copy her code directly; but more of this will be discussed in a later article on copyright infringement. The law would be absurd if it accorded copyright protection for all sorts of thoughts kept in most tech whizz heads which are known by them but may never materialise into a particular form such as written software.

This fine line between ideas and their expression in Copyright Law goes to show the importance of keeping one’s ideas confidential; great care should be taken not to reveal too many details about one’s ideas. In situations where one must share one’s ideas; a properly drafted non-disclosure agreement can go a long way to avoid finding oneself in Quagmire’s quagmire (pardon the pun).  To be able to enjoy the more extensive protection given by Copyright Law; it is also important that creators be aware of the legal requirements that must be met for copyright protection to be granted over their creations so that they can comply with them.

Do you have any questions on ideas and copyright? Please use the comments section below. The next article will discuss the requirements for copyright to subsist in a particular creation.

5 thoughts on “Blurred lines: Ideas versus expressions in Copyright Law for startups”