How an App & SMS can help end ZESA load shedding 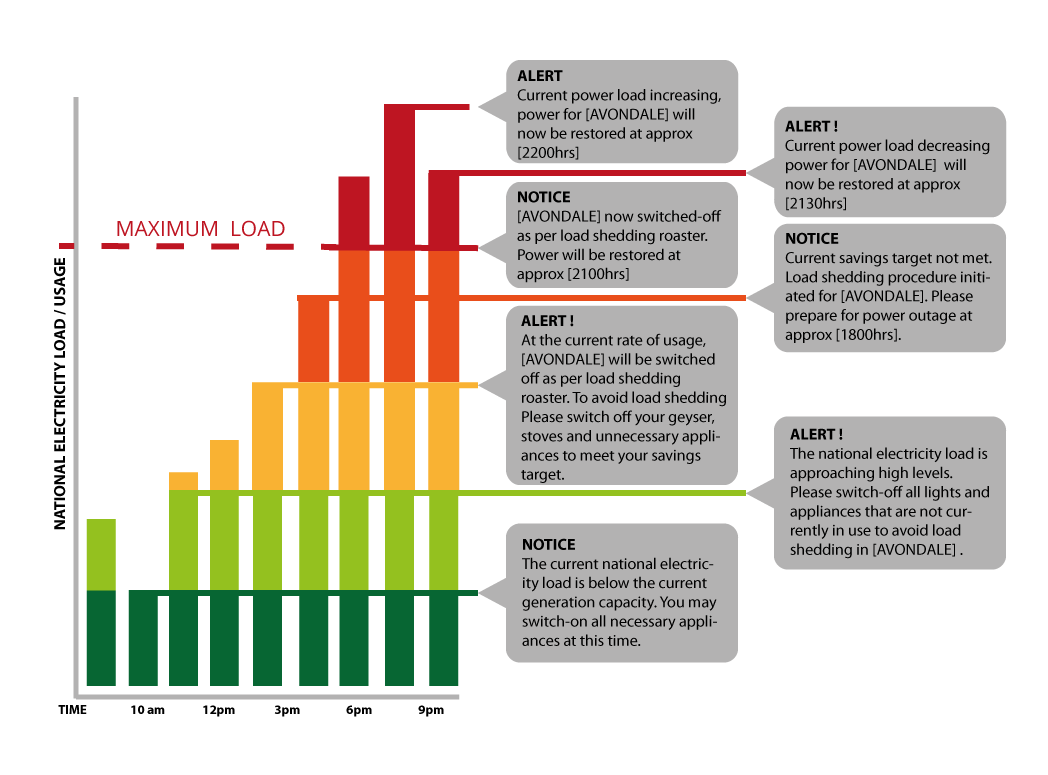 Today most of the African continent is in pitch black darkness. literally!

The Zimbabwean government, like a number of other African governments, has not – for one brilliant reason or the other – invested in new electricity generation capacity. To put this into perspective, in 2014, 13 million Zimbabweans will rely on generation capacity that was designed to support at least half of our current population. This is mathematically suspicious and practically impossible. This lack of new generation capacity has resulted in a shortfall of available electricity against an increasing demand. We reached the tipping point in 2007 when ZESA officially introduced long term load shedding. Anyone will tell you that there is nothing romantic about having a ZESA sanctioned candle-lit family dinner on a Monday evening.

The bigger problem
What is load shedding exactly? Put simply, load shedding is the rationing of available electricity by switching off some users to ensure that electricity demand does not exceed available supply. If this is not done, the demand on the electricity grid will exceed the available capacity. This – as your grade one teacher probably taught you –  “it can’t”. ZESA employs system controllers on a 24-Hour basis to balance out the grid by monitoring demand and supply. When demand shoots up, the system controllers systematically commence the switching-off of some users based on the load shedding priority roaster until demand matches supply. When demand eases, the system controllers will restore supply to users in the same systematic way.

This is much more complicated than it sounds. Electricity demand and supply fluctuates; at any given time, electricity demand and supply is bound to change due to various factors including weather conditions and time of day. This means ZESA’s system controllers are endlessly working the dials to ensure that demand is always just below supply. Getting this right involves a bit of mathematical wizardry. Now, when you factor in wide spread power faults and vandalism (which a lot of users confuse with load shedding) it all becomes that much more unpredictable. But it gets even more complicated.

Unlike water supply where reservoirs can be built to buffer water levels against unpredictable demand and supply variations. Electricity in our case cannot be stored. At any given time, we can only use the electricity that is being generated at that exact same moment. ZESA has to coordinate all this, often at least a day in advance.

At Kariba, Hwange, Munyati, Bulawayo and Harare, the power stations will synchronize power generation to meet demand in the rest of the country. During off peak hours when supply exceeds demand, the power station generators are put on idle or switched off while repairs and maintenance work is speedily done. During peak hours they are throttled up to maximum capacity again. To go off without a glitch, all this has to be a well-coordinated symphony of engineering brilliance. Given our outdated equipment and broken systems, it’s not going to happen without a glitch, try as we might. Put into perspective, load shedding in Zimbabwe could be worse, but it isn’t. The better question to ask is could it all be improved? Without a second thought, I think so.

I am convinced that the problem with ZESA’s current PR effort is that it does little to help us associate our electricity usage with load shedding. People just don’t directly associate their electricity usage with load shedding; somehow the two seem unrelated. To most of us, load shedding seems more like a random act of fate determined by a trigger-happy ZESA employee locked-up in a dingy underground switch room jam-packed with switches he occasionally flicks at random. Because of this, when we do get electricity we consider this our time in the lime light (pun totally intended) by using it unsparingly. The reality though, is that we could be one light switch away from exceeding the national generation capacity and plunging ourselves or someone else into total darkness for a few hours. The reason why electricity load shedding usually happens at night or early morning is because during those times we are all trying to use electricity at the same time, which is impossible, as any ZESA system controller will calmly assure you. If only we knew when it is a good idea to turn on the stove right?

I am certain the reason why most mobile phones are continuously recharged on time by their owners is because of their power status notifications. The beeps and buzzes that constantly alert the user when the battery is about to die, without these, your iPhone’s battery would quietly die in your pocket without so much as a whimper. But because users do get alerted, they’ll act quickly to address their mobile phone’s desperate moans. You’ll often find someone rushing uncontrollably towards a power outlet or wildly switching off some of their mobile phone’s functions to preserve the remaining battery life before their smartphone’s 30-second shutdown ultimatum is elapsed. I think this is an extraordinarily efficient way of getting people to respond to a situation that they have immediate control over. Just constantly remind them of the cost of inaction, throw in a bright red exclamation mark and a loud beep for added effect.

Borrowing from this same concept, our solution will rely on alerts sent to users via SMS or a smartphone app. These won’t be typical alerts encouraging users to switch-off their geysers because it’s the right thing to do. No! The system will rely on a geo-location based bulk notification system. Users will sign up to the SMS alert system via USSD or download a smartphone app, a user can choose to allow the system to automatically track and update his or her location using GPS or cell tower triangulation, alternatively, a user could choose to update their location manually when they wish. Besides user location (and phone number for the SMS option) no other personal information is required. 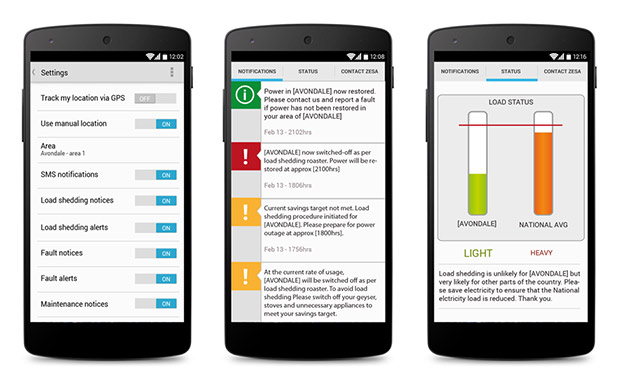 The notification system will be entirely operated by on-duty ZESA controllers using a basic laptop connected to the Internet. Besides users’ mobile phones, a laptop is all the hardware that our solution will need, most of the work will happen in the cloud. A Google Chromebook laptop will typically retail for less than $300. In the cloud, the system will monitor current generation capacity and demand. Assuming that the ZESA grid system is too archaic to somehow connect seamlessly to our system, the controllers will input generation capacity levels manually at intervals. The ZESA load-shedding roster will be programmed into the system.

When the electricity demand approaches high levels, the system will refer to the load shedding roster to get the areas that are first-in line for some ‘blackout action’ if power supply is exceeded by demand. The system will send alerts to users in those locations notifying them of the impending blackout. Depending on the power savings needed, the notification will advice the users to either switch off most or a few of their electrical appliances. At short intervals, the system will notify the users of their current achieved savings against the savings target. When this target is not met the system will expand its notifications to more “less-priority” areas until the power savings target is met.

If the necessary power saving is still not met, ZESA system controllers will input the areas that will subsequently be switched off. The system will alert all users in these affected areas of the imminent power outage, we can even throw in a dramatic count down, how about that? During the black out, the system controllers, via this system, will continue to notify affected users of the current load status until power is restored. 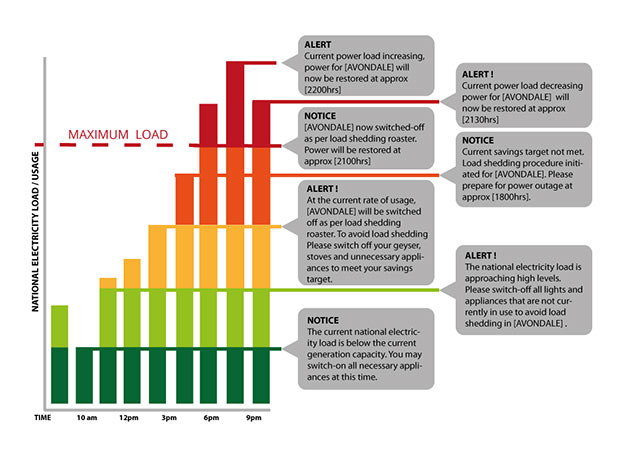 The system can even be more sophisticated than this, a user could request the load status from ZESA for their current area through the app or USSD  at any time and get a response informing them of their current ‘load shedding likelihood’. It could also be used to anonymously report faults, outages, dangerous cables and vandalism directly to the ZESA system controllers in real time from the app or USSD interface. This will aid the rapid response to faults and hazards. ZESA can also use the system to notify users of scheduled and ongoing maintenance work to just the affected users at no added cost, this will likely be cheaper, wider reaching and more effective than TV and radio ads.