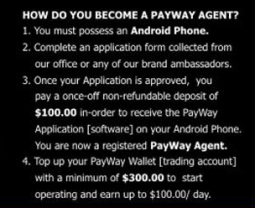 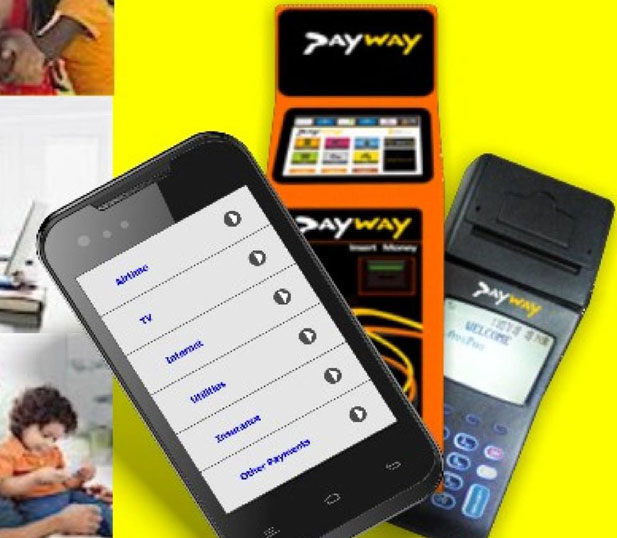 Through an article in The Sunday Mail today, Payway announced the launch of its electronic payment service which uses self service kiosks, an Android application, and standard electronic vending devices (the two via agents)  to allow customers to buy airtime, and make payment for other services like utility bills, Pay TV subscriptions and so on.

In term of how it works, an airtime buying customer (or bill paying in future) can go up to the kiosk, deposit their cash, and get to choose what number they want to push the airtime credit to. I’m not sure how it deals with the issue of the old dirty money we’re exchanging all the time in this country. This is not a new concept locally. I remember seeing such machines at the Travel Plaza in Harare some 5 or so years ago. Not sure how it went for those guys, or if this is them again, reincarnated.

As for the Android app and the vending device, an agent will basically sell the payment services from these. The vending device concept sounds quite similar to the Easi airtime vending devices that we covered here around 2012. The company’s vending machine picture shows they have so far signed on NetOne, Telecel, Econet and Africom.

At the end of the day their success will depend on how many services they can get on the platform. All MNOs, ZESA, DStv, City Councils for water bills, Schools, Hospitals, Game organisers (for ticketing), Internet providers, etc…

But even if they succeed with this, there’s another problem still.

The company may be a little too late to market considering they are really here to disrupt the branch model and, to an extent, the street airtime vendors currently selling scratch cards. The problem with this is that these have already been disrupted by mobile money. People load airtime into the mobile money electronic wallet and like to then use it from wherever they are anytime. Paying DStv from your home at night for example. Even though some customers will use these vending machines and the android app carrying agents, this market is already being eaten away. Unless ofcourse they make it super cheap to transact. So cheap it’s worth waiting for the morning, and physically going to an agent or kiosk. 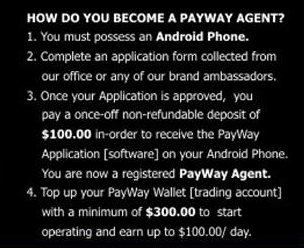 The other slight issue we had is their agent sign-up method. It looks the company is not willing to front its own money to get agents on board, choosing instead to get expensive non-refundable deposits from prospective agents. Their agent requirements announcement on their Facebook page reads in part:

Once your Application is approved, you pay a once-off non-refundable deposit of $100.00 in order to receive the PayWay Application on your Android Phone.

The PayWay app has to be one of the most expensive Android apps in the world! The whole “pay non-refundable monies to join” thing sounds too much like the network marketing scamery that too many an unemployed youth has had the ill luck of becoming poorer through.

Just to be clear; PayWay is an established reputable company with operations not just in Zimbabwe. They are very unlikely to want to scam anyone, but their methods just bring those painful memories to mind for a lot of people.