Colin Pringlewood who  made his debut in the startup scene with the now defunct Tengasa.com has now bounced back with a new, interesting venture called Parcelgogo. In his words, Parcelgogo is a website that “attempts to crowdsource the delivery of packages around town”.

Parcelgogo’s attempt is different from Walmart’s plan in two areas. Firstly, Parcelgogo is open to everyone, business or otherwise. Colin’s plan is to see “people that are trying to sell something online not have to worry about the time and costs of setting up a delivery service as well”. 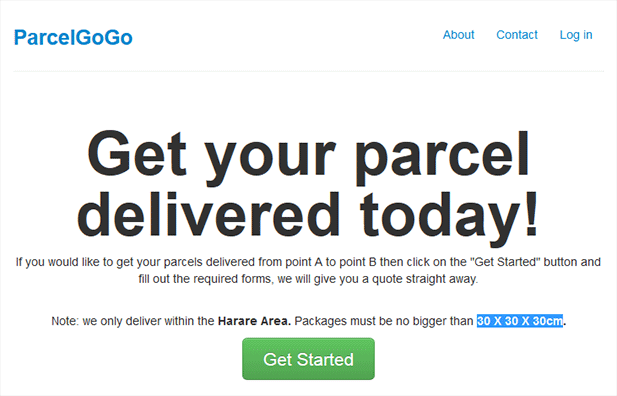 Secondly, Walmart’s model was in way dependent on the “inherent goodness of man” but Parcelgogo does away with the “human benevolence risk” as it is looking at people who are already runners or at least small time couriers as their crowdsourcing pool.

Parcelgogo is looking for motorcycle delivery drivers/couriers who can sign up to the website. Once a job is posted to the system the nearest 3 couriers will get an automated email from the website saying that there is a new job in the area, once the courier gets this email he/she will have to sign into the website and accept the job, the first person to accept the job gets the job.

A number of international startups, including Zipments and Postmates also operate with pretty much the same model.

Parcelgogo handles packages not larger than 30 X 30 X 30cm in volume and deliveries are limited to Harare for now.

At this stage the monetisation model is to collect a commission from couriers each month on jobs received through Parcelgogo.

Parcelgogo is currently running a survey to gather some data on the service. This suggests that there may be early tweaks to the services as new information comes in or, keeping in line with the lean startup theory (now practice), the service may even be pulled down if the survey feed back is not promising.