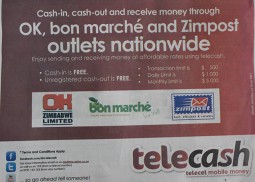 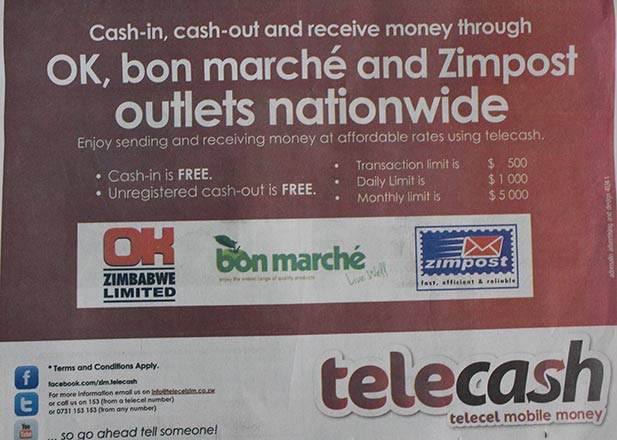 For the first time since its launch. Telecel’s Telecash has started advertising its mobile money agent network in the local press. Telecel is currently embroiled in a bitter wrangle with Econet over access to mobile money agents that first signed up with EcoCash. The dispute is currently in the hands of the Reserve Bank of Zimbabwe after Telecash lodged an official complaint.

However, it seems now that Telecash is cautiously moving on starting by advertising their big agents, which are also EcoCash agents, but “can’t be ruffled up by Econet”, a source said. Over the past few days, Telecash has been advertising three relatively big companies that are part of their agent network, namely OK and Bon Marche stores and Zimpost post offices nationwide. An industry source also indicated that Telecash has also signed up TM stores as part of their agent network.

We suspect Telecash may have delayed advertising their agent network so that it would include the small agents in the material, which they however couldn’t do because of the alleged victimisation of agents from Econet.

With regards to the smaller agents, Techzim sources said Telecash was “now moving on” and  that Telecash would now focus on acquiring agents that have no association with EcoCash until the Reserve Bank has reached a position regarding their complaint.

3 thoughts on “Telecash moving on, now advertising Agents that can’t be “ruffled” by Econet”