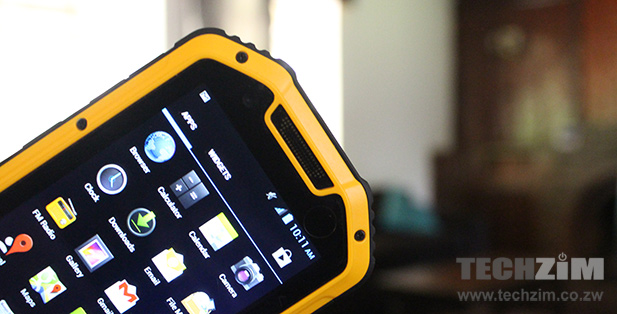 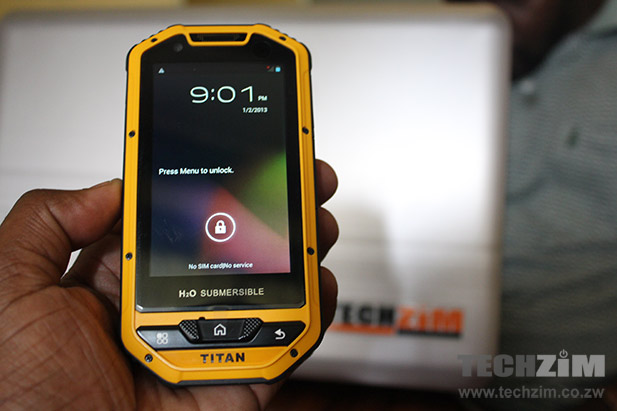 A few weeks ago we had a brief post on our “initial thoughts” of the Titan smartphone which Econet is retailing for $366. We have since got a hold of the rugged smartphone and we still think the phone is ugly and we have more insight on it that will make it more and more undesirable for the regular consumer who is no longer interested in low spec devices. However, the durability of the Titan is something that its “true target market” (Econet seems to be going for wider market) may find really appealing.

The design and build of the Titan is its major differentiation position so we will dwell more on this aspect. At 21mm, the Titan is right there amongst the thickest smart phones around. The width is 65 mm with the protective bezels occupying around 20% of that which makes way for a very tiny screen in relation the phone’s size. Since we could not break it down completely, is seems like the Titan smartphone has an inner shell which is essentially the phone and an outer protective shell made of black rubber and a really had yellow plastic, about 8mm thick.

The Titan weights a heavy 180 grams!

The USB connector and the earphone sockets have 5mm rubber covering them on the right side of Titan. The rubber covers does a good job in protecting the device from dust but it’s a bit of an inconvenience when you plug in the earphones because the cover will remain hanging sideways. Maybe the earphone jack and USB connector could have been placed at the top of the phones to make sure people can still listen to music with the device in the pocket, without the rubber cover being a discomfort. 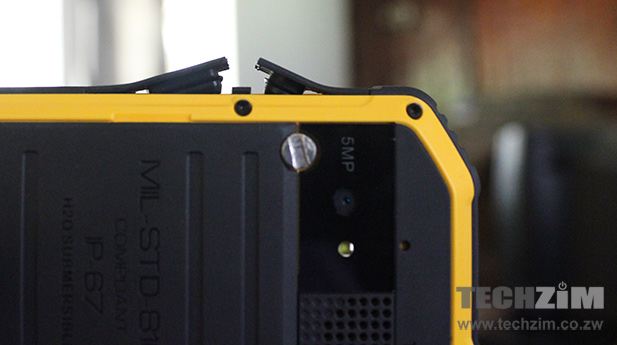 The left side of the Titan R5 has 5 buttons, all of which require a bit of effort to get them to respond when pressed. The first set are the up and down volume controls made of rubber. These are not hard to press but the texture is rough so much so that people may sense a discomfort on the fingers when they press these. The other there buttons, namely the power button, the flash light button and the reset button are a lot tougher to press not only because they are made of rubber, but also because they are embedded in a tougher rubber layer. The power buttons requires user to press and hold for at least 3 seconds to get the desire action (on/off).

The battery cover of the phone is one aspect of the design that we found most frustrating as gaining access to the SIM card slot under the battery in no easy feat. You literally have to unscrew 5 tight screws using a micro type of a screwdriver that comes with the device. Once you have done this and placed the SIM card, you then have to place the cover and screw it in to water tight levels to retain the protection aspect. We timed the whole process and it took us 5 minutes to remove the battery cover, place the SIM card and place the cover back on. The micro screwdriver is also not only too small, but its also made of a semi-flexible rubber making it a bit difficult to use.

The official Titan R5 spec sheet says the screen is 3.5 inches making it a bit small for a tough device. The screen is embedded a millimeter or two inside the phones protective plastic bezels which protects it should it fall face first on flat surfaces. The screen is made of a hardened glass which surprisingly does not make it any less responsive or rough on the fingers when using it.

The display quality is nothing to get excited about. Images are hazy and the device is not great with videos as well.

The Titan is weak on memory.  The 512mb RAM is disproportionate for a phone retailing at $366. 4gb ROM is acceptable but will soon run out especially when media files come into the mix.

The 1GHz processor gives the Titan a bit of speed but this is of no use if you can’t run large file apps and games because of the limited storage. For $366 , Econet should consider including at least a 16GB memory card with the purchase of the Titan.

The primary camera on the Titan smartphone is a 5MP rear camera supported by an LED flash which doubles as a flash light. The Titan’s camera is has an OK aperture that’s able to capture good images in low light environments. However, the images are not as vivid as you would expect from a device beyond $300. It also has a panorama feature which is a bit difficult to use. 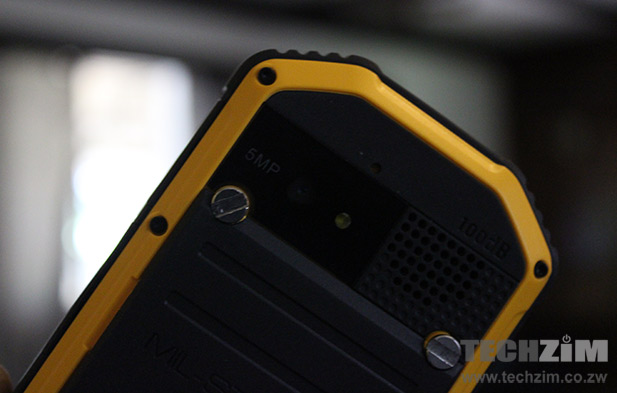 Zooming in will reduce the quality of the images as can be seen below.

The battery is probably the only other feature that supports the Titan smartphone’s “built for tough environments” value proposition. The 2000mAh Li-ion battery has more capacity than the 1560mAh on the iPhone 5S. Thanks to the small screen, limited memory and a relatively weak processor (these do not encourage battery guzzling activities like gaming and watching video), users of the Titan will likely go a day or two without recharging the phone. 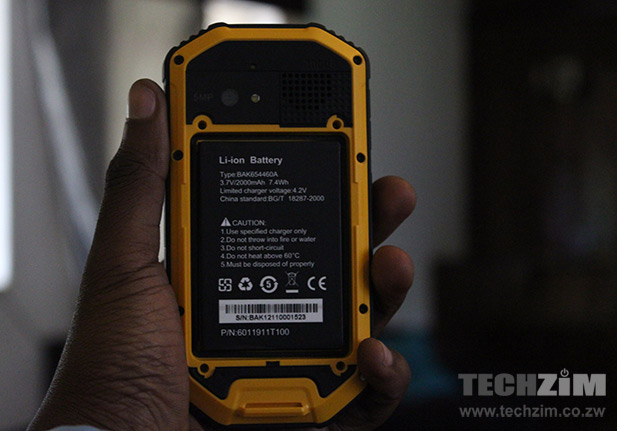 We benched the Titan smartphone using just the Antutu benchmark which confirmed our position that the Titan is an entry level smartphone covered in super muscle. Overall, according to Antutu, the Titan smartphone is right there at the bottom of the chain and is classified as a “poor device”. Please note this ranking rates the performance of the phone’s system and not it’s physicality.

Speaking of physicality, the Titan smartphone is compliant with US military standard, MIL-STD-810G. This means it passed the physical prowess test across different environments.

The Titan Smartphone is said to be “H2O submersible for 30 minutes in waters as deep as 1 meter. We could not resist to test these claims so we put it in a large bucket for 30 minutes and the Titan Smartphone proved equal to the test. The Titan did not freeze or choke after we removed it from the water. We opened the phone after the baptism and there was no sign of any water penetrating the device.

However, we tried to call the line that was down under with the Titan but it was unreachable as the signal fell whilst in water. We are not sure if the same result will come in more open waters. 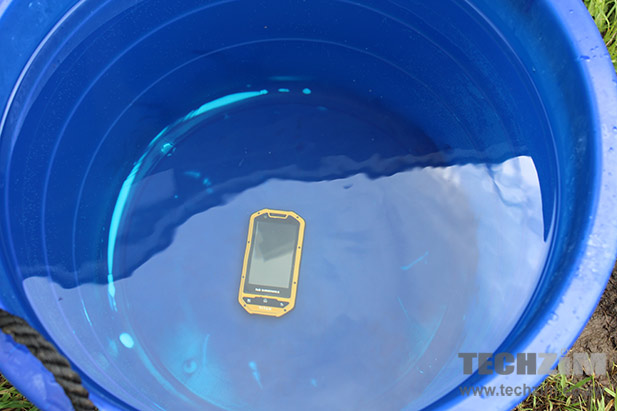 If you’re most people, you probably view smartphones as more than just utility devices but companions that not only have to look good, but also do a lot for you in quick time offering the best possible experience. The Titan smartphone is not like this. It’s a device meant for tough environments were things are always falling, rain is always pouring and were people are always thinking in terms of safety. It’s meant for people who wear industrial gloves and shoes for the better part of the day.

However, for the general consumer that’s looking for something durable, this device is “it” but be reminded you that you wont have the same quality experience (gaming, camera, video, browsing) comparable to any other smartphone within the $360 range. The specs are really lacking for a $360 device.