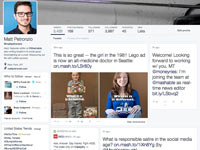 So it’s quite interesting that Twitter is testing out another new design for their web client. Also very interesting that they are looking to make Twitter look more like the dominant social connections networks, Facebook and Google+. But even more interesting is why they’d want to departure so boldly from the Twitter one column news stream service we’ve known all these years.

One thing that came to mind is that Twitter reported lacklustre growth in their first results recently. Specifically, Twitter is facing a slowdown in user growth. Could the change be motivated more by the need to have a more visible and ‘staying’ appearance of ads?

With the current design, ads are just another tweet in a rapidly moving stream of organic tweets and may not be prominent enough to yield any results for advertisers and therefore Twitter revenue. With a slowdown in users growth, could Twitter has reason to show the average revenue per active users is actually growing, despite.

Aside from adding more real estate for other things (such as advertising) and the new two column feed, the one other unmistakable thing about that new design is that it’s much more pictureful than the Twitter we’re using now. This is important, because any design change at this stage of the company would definitely have advertisers (well ad revenue) as one of the top priorities.

Remember, close to the end of last year, as the company prepared to IPO, they pushed out an update forcing in-stream video and image previews on users. That same thinking seems to have gone into the new design, it’s about media previews for an aesthetically pleasing (and distracting) experience. Essentially a Facebook, yes. Advertisers generally like multimedia content because then they can pull the reader to their story in more creative ways than they can do with a plain tweet.

Of course, a new pictureful pretty Twitter means some compromise on what people know and love Twitter for – a rapid news and event sharing service which is not valued for the beauty of the updates but more for their text content.

Whether this will work for them or not (depending on what ‘working’ is) is ofcourse a matter of wait and see. Still, very interesting what a company a company would do to remain commercially relevant.