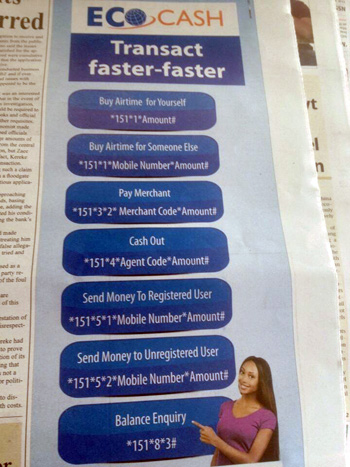 Remember the EcoCash Droid app that lived for one day? Well the thing that Econet did to make it go away – disabling long USSD codes – has just been reversed with a new campaign called Transact faster-faster. A Twitter user, one muushafarie, pointed us to an ad in a local daily this morning. EcoCash faster-faster looks designed to introduce easier ways to transact, a move that has probably come as a reaction to Telecel TeleCash unique selling point – simplicity.

The long codes, such as *151*1*Amount#  for buying airtime, cover transactions such as making payments, cashing out, and balance enquiries. They succeed at this simplicity. At least for those subscribers that will save these long codes as “contacts” in their phones.

There’s no telling if the EcoCash android app that awakened everyone to this simplicity will be coming back. But we’re likely going to see other developers come up with their own in coming weeks.