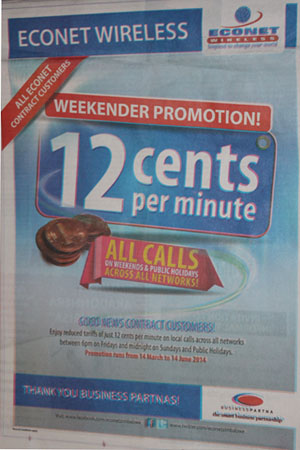 Competition is always a good thing in business and the more intense it gets among providers, the better the deal for the customer. The tussle for subscriber loyalty and a bigger chunk of voice call revenues among network operators has put the Zimbabwean consumer in a sweet spot.

Econet Wireless has launched a reduced tariffs promotion for its Business Partna subscribers. Dubbed “The Weekender Promotion” it offers reduced tariffs of 12 cents on all locals on weekends and public holidays across all networks. The promotion which starts today is set to run until the 14th of June 2014.

This has been offered as a reward to contract customers for continued loyalty and support to Econet. It definitely is a welcome development for contract subscribers who hadn’t been part of any promotion offering any reduction in tariffs.

Netone recently introduced a new promotion for its Easycall subscribers dubbed “The Mahala Weekend Promotion.” This offers unlimited talk time on Netone to Netone calls on weekends, as long as a minimum of $5 has been topped up from Monday to Friday.

While both these promos are “weekend specials” the differences offer an interest perspective on the impact they are likely to make.

Econet’s “Weekender Promotion”  scores points for being a  cross-network tariff reduction and though that’s a big deal in it’s own right its also remarkable how they have done something for their post-paid subscribers. It’s the first time such a move has been made by any network operator as all promos we have seen in the mobile wars have been directed at the pre-paid consumer.

The 12 cents price tag for weekend calls that Econet has set for this promotion has a ripple effect for VoIP operators. These guys have been offering services for cross network calls at the same price with razor thin profit margins.

VoIP operators such as Africom have not been able to overtake GSM operators because of certain constraints. One major limitation for Africom, which has been the most visible player in this market, has been the need for users to get CDMA phones to use the service. It’s safe to say VoIP operators are hoping Econet does not go for the jugular and introduce this “weekend special” for its massive prepaid subscriber base.

Netone’s “Mahala Weekend Promotion” sounds great when you consider the possibility of unlimited talk time over the weekend. However their $5 recharge minimum, which is no doubt a way to ensure a consistent revenue stream for them especially from the “Dollar A Day” subscribers, might be considered as being a bit steep.

Netone’s subscriber base which is the smallest among the three network operators also affects their promotion. Although they have managed to grow their subscriber base its safe to assume that most of the numbers in any contacts list are predominantly Econet and Telecel. Perhaps this means I have to convince everyone I talk to on weekends to get an Easycall line to really enjoy this promo.

Telecel Zimbabwe who led the pack with bonus promotions as early as 2010 are yet to roll out any promo in line with weekend rewards. Their last play was a relaunch of their old promo  under the name “The Mega Bonus Reloaded Promotion” In June last year. This gave subscribers bonus airtime equivalent to whatever amount they would have topped up with.

The new twist to Telecel’s promotion that sparked people’s interest was how the bonus airtime could now be used across all networks. This promotion was tweaked in November 2013 leaving half of the bonus airtime for voice calls and the other half split between data and SMS services.

This new wave in promotional offers to subscribers is hopefully an indication of how network operators are taking more time to design packages that will offer their subscribers a better deal for every dollar they spend on these services.

It will be interesting to see if Netone and Telecel will also offer promotions targeted at their post paid subscribers as well. Even more interesting to see will be whether or not any operator will offer unlimited talk time rewards that cut across all networks.