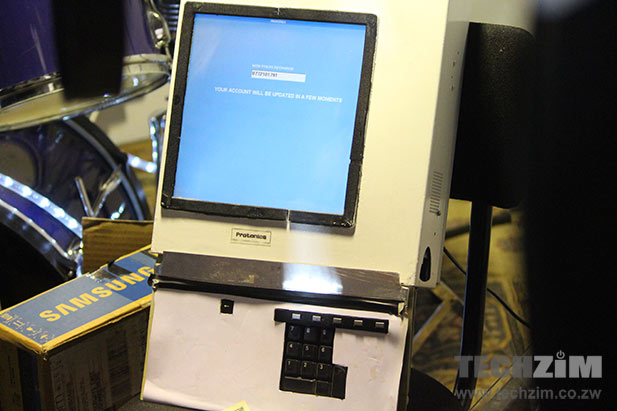 Remember George Chingore?  He was the Harare Institute of Technology dropout who built an airtime vending machine and pitched it at Emerging Ideas‘ Pitch Night in March. Well I caught up with him at the April Pitch Night held last night and he says his product is taking the first steps towards commercial production, first by going through the regional patents office.

He managed to reveal that the Protronics airtime vending machine patent papers were filed at the Africa Regional Intellectual Property Organisation (ARIPO) headquarters in Harare. The papers were submitted four days after the prototype was on display at the March Pitch Night.

We also understand that George has received three different offers for funding from two local companies and a Zimbabwean-managed South African based company. The identities of the companies courting Protronics are known to Techzim but he has asked us to keep it under wraps until a deal is finalised.

We however know that there is one promising front-runner. This is the company that has already helped him link with lawyers to facilitate the patent process and Chingore is optimistic that a deal will be agreed in the coming weeks. He is also impressed with this particular suitor for their proven business acumen and he hopes that this will help him focus on what he does best – the technical side of things.

According to Chingore, once the patent process is complete. The provisional plan is to assemble several machines and place them in different centers around Harare. Currently, the cost of producing one Protronics airtime vending machine is between $2000-2500.