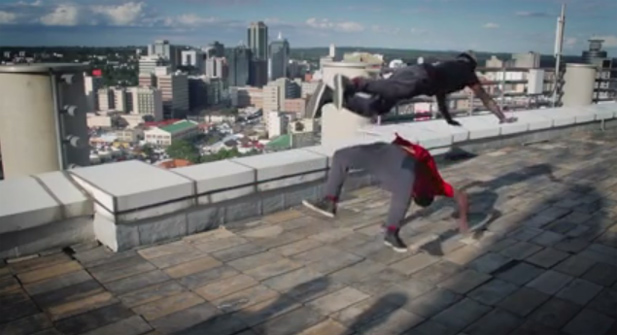 Two days ago a Zimbabwean parody of Pharrell Williams’  “Happy” video was posted on YouTube and it has experienced a huge success with a little under 56 000 views in two days. A lot of significance has been linked to the video which extends beyond the numerous views it has received.

We spoke to Louise Bragge from Urban Space, the team behind the Happy Harare concept as well as Simon de Swardt from Media Matrix who handled the production of the video. They elaborated on the efforts involved in doing a Harare version of what has been one of the most parodied videos from the 2013-2014 period.

The main idea for the video came from Urban Space’s efforts to integrate concepts of environmental sustainability, art and co-creation to the Zimbabwean urban landscape.

According to Bragge, they observed how Harareans from all walks of life generally participate in anything that is happening around them in a positive and cheerful manner. They also sensed an underlying desire from people to be able to express and enjoy themselves more openly without always referring to “the issues” that they are challenged by in their daily lives.

Besides catching the wave of the worldwide “Happy hype” and having some fun, the idea for the “Happy Harare” piece came as a prelude to Urban Space’s plans to popularise and then mediatise art and collaborative participation in the public space.

Urban Space also tries hard to promote the use of digital and social media for advertising and sharing concepts, and they believe this is widely untapped in the Zimbabwean context and only just beginning to figure in the collective psyche.

Their work is not ending with the Happy Harare video. They have a major road painting event planned for later in the year and intend to make a video of it to show the world the upside of Zimbabweans and their reality which rarely makes it into the media.

Simon de Swart of Media Matrix attributed some of the video’s success to the large Zimbabwean diasporan community which has been drawn to the video not only because for its Zimbabwean take on a global hit but largely because of its ability to create an emotive connection with kumusha/ekhaya.

He also shed some light on the filming which took a day and the challenging process of editing the various clips which took up a full week. Unsurprisingly the team had to get police clearance for filming in public as well as permission from the individual privately owned sites such as malls, hotels, children’s parks and building tops. With the right clearances the process was effortless and free.

Media Matrix is keen on making more videos that depict the happy, lively side of Zimbabwe that people are familiar with. Last year they approached the ZTA with a full scale concept for the UNWTO General Assembly  meant to be an overview of the people and places of Zimbabwe. Though the proposal did not go ahead Simon believes it would have been a great opportunity for the country as the country requires positive press.

Simon highlighted that the success of this video was not meant to translate to monetary dividends, though they are all excited by the massive exposure and overwhelmed by a huge response they had not anticipated.