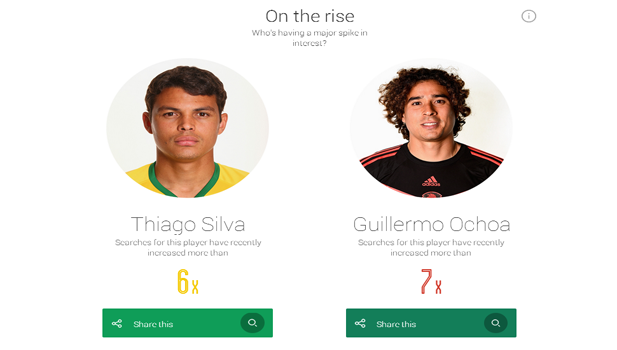 With the FIFA World Cup in its sixth day a lot of excitement that comes with the tournament has spilled into the cyberspace and is being driven by the internet as well. Tech is painting an engaging picture with the data that is harvested on searches relating to the football fest with some interesting trends emerging around the beautiful game.

A look at the Google Trends facility shows data from specific countries on everything from the matches played and the games lined up with “commentary” that goes beyond the 90 minute look at the game itself. Search trends relating to the entertainment for the World Cup tournament, the soccer stars (and their spouses apparently) and national anthems is turning out to be a colourful digital footprint of sports sentiment.

A look at the exciting encounter between Brazil and Mexico shows search trends that will seem obvious to anyone who watched the game last night. Mexican goalkeeper Guillermo Ochoa who was the biggest barrier to Brazil ‘s victory has been the most trending search. Who would have thought  the question “Who is Ochoa’s wife” would pop up as one of the most frequently asked last night?

Other off-pitch trends show interests in Neymar’s hairstyle, David Luiz’s rumored haircut and nails painted with the Brazilian national colours. In terms of the game itself there was a search trend on Ochoa’s spectacular saves.

According to the analytics up to 20% of the adult population in these countries has been following the World Cup with 15% of people aged 15 years and older enjoying the matches with African teams. There is more data to suggest specifics on gender and countrywide viewership patterns as well as confidence in teams which is going to be released as the tournament progresses.

There is always room to see how startups can take advantage of such information. The growth of the African continent’s interest in soccer is something that no doubt needs to be explored, with the World Cup being just one example of this heightened interest.

It would be good to have local startups create apps and VAS solutions that cater for this huge appetite, something that Econet and Telecel have already started cashing in on with SMS based promotions for the World Cup.

All these trends just go to show how the fever associated with this World Cup or any other global sporting event is not necessarily about the sport itself. Thanks to big data there’s more evidence to justify marketing and media investment that is not necessarily related to athletic performance. This just might be the angle local startups should explore, thanks of course to information provided through big data.