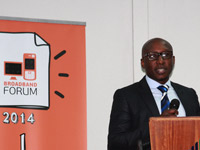 I just thought I’d share a few notes that appealed to me from the second annual Broadband Forum held last week in Harare by Techzim. Appreciating this forum one has to understand the mix of attendees and panelists from whom some very serious lessons were learnt, positions explained and a general direction assumed in the future of broadband internet in Zimbabwe.

Speakers and attendees discussed the evident fact that indeed broadband is now available in Zimbabwe. There is now backhaul access to internet even from the remotest areas. While service providers like Liquid Telecom and Powertel have concentrated on permeating the urban divide with fibre, TelOne has complemented this by offering satellite alternatives to counter the distance and terrestrial challenges faced by fibre. They have done this by launching the new Ka band spectrums beamed via the Avanti’s HYLAS 2 satellite at speeds of 64Kbps to 2Mbps. This comes as a welcome development to education centres (their main focus) in previously unreachable and remote areas. Towards the MDGs it is also government perquisite that internet be available to every citizen.

Form the Liquid Telecom talk delivered by the Liquid Zimbabwe MD, Mr. Wellington Makamure, the opportunity of Zimbabwe now being connected to all the major undersea fibre cable systems SAT3, EASSy, WACS, TEAMS and SEACOM was discussed. Liquid, Mr. Makamure said now has a combined 20,000 tentacle kilometre of fibre optic connections. With such investment, it’s now possible to bring high speed internet to every doorstep opening doors to services such as Liquid Telecoms’ triple play service (TV, Voice, and Internet). He was quick however to say that they were not themselves going into TV right now as to provide such services the licensing from the Broadcasting Authority of Zimbabwe has to be in place.

The Liquid Zimbabwe MD also explained the opportunity of keeping local traffic local. As an operator and through its ISP ZOL, Mr. Makamure explained that the were ready to talk to developers and entrepreneurs to facilitate hosting of content locally on accessible terms in order to leverage the the high speed connectivity available in Zimbabwe through their network and other operators.

In terms of network rollout, Mr. Makamure said locally alone the company has 8,000km of lit capacity currently running traffic. The company, he said, was rolling out the latest fibre technology (GPON), which allows 50Mbps per home. He also said about 7,000 homes in Zimbabwe now have a GPON fibre cable laid along their street opening up opportunities for content and various kinds of internet services to these homes.

While the skeleton services have now been made available, there is an identifiable gap in the consumption mechanics. Key is the fact that MNOs have again already penetrated this market to some extent bringing internet to any capable smartphone. Zimbabwe has a smartphone penetration of about 40% (or 5.2 million – Potraz). That said, there is still a very large gap on per-household and per individual consumption mainly because of the cost.

Similarly, the “wholesale hardware”, that is, backbone internet is now available, it is the finer backhauling to as many users as possible at the most affordable cost that is the next frontier. Retailing of internet in various forms that include internet television, broadband to the home and office.

Pronounced in the Forum was the fact that broadband is still unaffordable. There is an uneconomic tendency by the current broadband service providers to compete in CAPEXing infrastructure across Zimbabwe to the extent that in some cases there are multiple parallel fibre cables on the same routes. While this is a positive in as far as consumer fall-back, it also comes as a detriment in the cost and period of ROI; which is subsequently passed on to the consumer at the bottom of the food chain. As it came out at the Forum, there is absence of policy direction in the spider web process of laying cables, a challenge experienced with the MNOs multiple network “boosters” per unit area all over the country.

One solution that was very clear in this regard is the need to share and multiplex the capacity which as it is presently is rather redundant (English not engineering). If Liquid and SEACOM for example where to share (DWDM multiplexing) the cost of drawing offshore internet to Zimbabwe, the cost wold be significantly lower.

In addition to internet access, local hosting cost is rather high to prohibitive for cloud service providers. The cost is so high that internet startups would rather buy space from international companies like Amazon to publish local content which is then even more expensive for the end user to access as opposed to local hosting. The irony being that there being a national internet exchange (Zimbabwe Internet Exchange (ZINX), the terminating costs are low to zero. This means ISPs could actually afford to offer free access to some locally hosted sites. Of Zimbabwe’s most popular websites, less than 10 are hosted locally.

Zimbabwean law requires a minimum tier 3 data centre and one exists at ZOL and Dandemutande from which SaaS, IaaS and Paas are offered. Again the challenge highlighted from Dandemutande is that of adoption and take-up of services wherein it takes up to three years from availability of such services before they begin to register a strong uptake. As with broadband, there is a strong persuasion that as opposed to wholesale supply there is need to work out retail packages to accommodate the emerging startups, individual and other “lower-end” markets. This could help to counter the “illegal” storage of data externally with such cloud services Google Drive, Dropbox, Box.net, One Drive and hoards of local-but-dot.com websites.

The adoption cycle of ICT services is marred by lack of appreciation relevant services broadly and broadband services in particular. This is mainly caused by lack of educative marketing of such services as banking, e-payments, e-commerce and so forth. The relevancy of such products as Internet and SMS banking and Mobile Money Transfer has not been fully explained. They are dished out in their most raw and unappealing state rather than branding and dressing them to highlight the convenience they offer to the different niches which subsequently are arrayed more by age than any other criteria.

The younger generation have embraced technology at a faster pace than has the preceeding elderly. The consumption pattern of the youth is contrasting to the later in that while to the elderly internet services are introduced to replace traditional channels, to the youth, services such as connectivity and electronic payments are everyday fundamentals into which age they are bone. As such the need for upskilling cannot be overemphasised both at government policy level and at private partner service providers

Derivative opportunities posed by the forum include the creation, branding, hosting, and retailing of local content. Platforms that will allow these services will score higher successes to testify at the next Broadband. This emanates from the general consensus that VAS are becoming more and more of an everyday service. Companies like Econet seem to have shifted their stance to now hearing ideas and creating mechanisms for exposing mobile VAS from various startups and developers. Companies like Dandematande promised to come up with smaller packages to allow for the retail market data centre services and Liquid Telecom and SEACOM are working on bringing internet from the highway to every home.