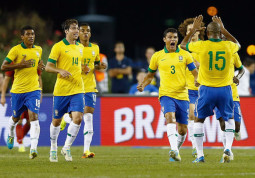 Unlike most people I don’t really support many teams during the World Cups. I admire the aesthetics, consistency and team of effort of the Germans above all but I also have a soft spot for the underdog. Nothing is quite as mesmerising as the spirit and dogged performance of a team that has nothing to lose.

I also relish Brazil’s defeats. I have since 1994. I have celebrated all of Brazil’s defeats and watching their demise in real time makes for my all time favourite moments. Nobody should get that many trophies; it’s just immoral.

So seeing as it is now that the World Cup has come, I have been wondering which would be the best method for a Zimbabwean to get the full out of the World Cup tournament. After considering three options: ZBC (as if this was really a choice anyone could seriously make), Live Streaming using an internet connection and DStv.

ZBC is not a choice

During the last world cup I had the misfortune of watching the ZBC broadcast of the Netherlands vs Brazil match. Twenty minutes or so into the second half when both teams were level, the live match feed was unexpectedly cut and a revolutionary video showing Joshua Nkomo started playing and by the time we were brought back to the play the score was 2-1 thus I missed the Sneijder-Robben magic.

I was robbed of the live enchantment of the moment and had to content with highlights which aired at an ungodly hour. This was 2010 which meant only IT admins could access YouTube while the rest of us wallowed behind Squid proxies.

“DeadBC”, as some have been pejoratively calling the state broadcaster, has solemnly promised to screen all the matches. Even if you believe this, which also means you believe in Aliens and Unicorns, there is still the matter of picture quality.

Although Channel 2’s picture quality is somewhat palatable, ZTV1’s picture quality is simply wretched even on the DStv bouquet. Then there are the despicable fonts they use for credits and such. You should watch their early morning weather report if you don’t believe me. The font was taken right out of Office 97.

I also wonder how they are going to fulfill their promise when matches overlap as they are wont to do seeing as it is that they only have one channel that covers the entire country. Do they get to play God and arbitrarily decide which matches get screened live? Or will they broadcast them simultaneously using a split screen with Charles Mabika screaming both commentaries in the background? Most likely I will not get to see the underdogs who I love.

The picture is usually of a poor quality, the video choppy and the sound is often punctuated by squawks that will make your ears ache. So unless you have boatloads of money and a great ISP – and mine is certainly not great – then streaming is not really an option. There is also the added cost of paying the live sports stream provider which further increasing the costs.

And then there is DStv

DStv have their extortionist pricing model where I pay a fortune and receive tons of channels I do not watch in return, just so I can watch sports. They, however, have coverage everywhere and their picture quality ranges from reasonable to HD.

They do not offer a perfect service, as most have complained frequently but they are second to none in terms of choice and picture quality, mostly because they are a monopoly. But between the impossible worlds of ZBC and streaming DStv wins – again. Most Zimbabweans, in my opinion would do well to go this route.

Putting my money where my mouth is I have as of this morning searched my garage for my good old Decoder, dialed *151# and sent $77 to biller number 22108. There is no way I am going to miss the moment when Brazil receives a thrashing this time around. Unless God and ZESA decide otherwise. Which reminds I need to go buy a generator …

12 thoughts on “And DStv wins…again”