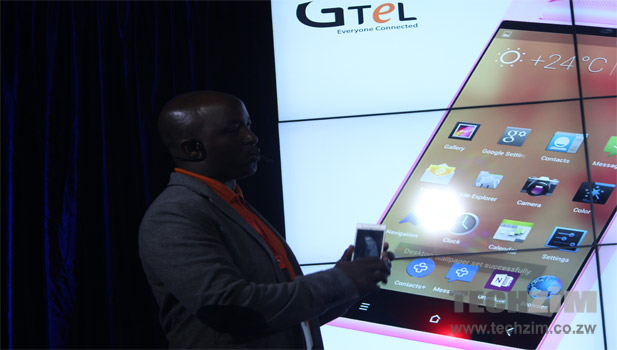 Local mobile devices company G-Tel Cellular launched a new device, the A750 Xplora MX1 mobile phone tonight at a glitzy event at the Harare Club. The new device, which runs on Android goes head to head with other flagship devices such as the Samsung Galaxy S5, Apple iPhone 5S and local brand Astro’s Virtual 2 The new phone succeeds the A717 Explorer as the G Tel brand’s flagship device.

Speaking at the launch, G Tel CEO Mr Chamunorwa Shumba spoke about how his team has been moving from feature phone distribution with their 85% of their product line being smart devices. The G-Tel brand was commended by the guest of honour, Minister of ICT, Webster Shamu for advancing indigenous business practices in ICT which the government is keen on supporting.

Shumba pointed out that G Tel is migrating to devices with later versions of the Android OS (Versions 4.0 and later). The A750 Xplora isn’t powered by the latest version of Android, something Shumba was quick to acknowledge.  Judging from this and its specs it would appear the phone was designed as a challenger to the Samsung Galaxy S4 rather than the Android Kitkat powered Galaxy S5.

The device’s key feature is its swivel camera with the one function that drew cheers from the crowd present was its Guest Mode that restricts any other user from accessing anything other than its basic functions.

We shall be publishing a full review of the A750 tomorrow offering a closer look at all its features and performance in detail. In the meantime here are some of the quick specs for the phone which has been priced at a reasonable $390.