The GTel A750 Xplora MX1, one camera to rule them all! 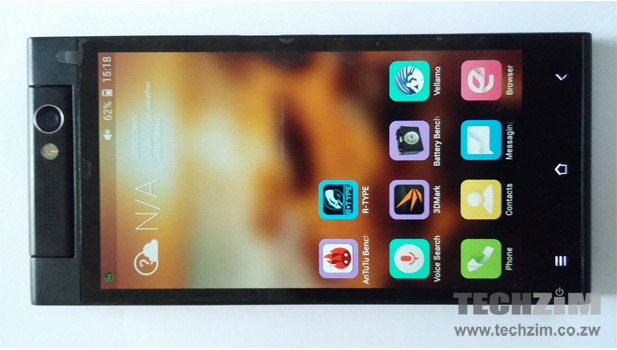 GTel, formerly G-Tide is a name that at one point in time became popular for providing cheap phones for the masses. However with time the company has matured and now provides reasonably priced devices with decent specs.

Last night they launched their latest offering called the GTel A750 Xplora MX1. It has been priced at $390.

This phone follows a unique design suit, where instead of having two cameras, it has one that that swivels. The internals of the GTel A750 Xplora include, an octa-core processor paired with 1 GB of RAM and 16 GB internal storage. The graphics are provided by the mali450 mp4 which is a mid-tier graphics chip.

For this review, the packaging will be included seeing as how the supplier seems to have gone the extra mile with included accessories. The packaging includes a pair of in-ear earphones, the USB data cable, a charger, a screen guard, a SIM extractor and a manual. The earphones are metallic, and give good bass. However the treble was a bit weak.

The phone has a matte back with the volume rocker and power buttons both on the right of the phone. On the top we have the swiveling 13 MP camera and flash which makes for great selfies and also for normal picture taking. On the left is the micro-SIM slot and it can take up to two micro-SIM cards.

The bottom of the phone has the USB port, earphone jack and the mic. The phone’s memory is non expandable and is restricted to a now relatively low 16 GB, with only 9 GB being user usable. The phone is completely sealed and presents a worry as to how well the device would survive falls. Another area of concern is the build quality of the hinges on the swivel camera which seemed rather weak on the right side.

This is not a new concept and other manufacturers like Oppo and LG have utilised this rotating camera technology in the past, it is interesting though to see how the Zimbabwean buyers will handle this design concept.

Rotating the camera either to the back or the front of the phone automatically launches the camera app – even if the phone is not active. The advantage with this setup is that selfies taken by the camera will be of a decent resolution. The phone features one LED light/flash that sits next to the camera lens.

On the software side of things, the camera app comes in with a few more features than its competitors in the same price range as the GTel A750 Xplora MX1. There is the ability to change settings like brightness, contrast, saturation, picture size and ISO which gives the user greater control over the overall picture quality.

There is a “Phone booth” option which gives the user a selection of frames or animations that one can select to use when taking pictures with the camera. The camera app also features a variety of ways to actually take the picture including smile shots where the app automatically takes a picture when someone in focus smiles, one can even select a hand gesture – think peace sign – that once detected will cause the camera to take a picture.

The camera app also features a video recorder that records in low, medium or high quality format.  Again the video recorder performance is nothing out of this world because of the screen’s poor colour reproduction. The camera performance is decent but the overall picture quality is compromised by the poor colour reproduction of the device’s screen. Colours on the device are generally dull and have a washed out look with white highlights in pictures coming across as yellowy.

The Xplora MX1 is sporting a 4.7” IGZO capacitive touchscreen, with a resolution of 720×1280 which gives approximately 312ppi pixel density. The indoor visibility of the screen is good and outdoor legibility decent, viewable even with full sunlight during the noon.  Colours are somewhat washed not carrying the vibrancy normally associated with flagships. Changing the settings and making the colours more saturated does help with the colour issue.

The user interface is a non-stock version of Android 4.2.2. Unlocking the phone reveals a screen with a wallpaper and a clock. Swiping up reveals the home screen there is no app drawer however there are the regular quick shortcuts for the phone, contacts, messaging and browser apps.

The number of home screens is relative to the number of apps installed and cannot be altered by the user directly. The manufacturers have also added the feature to tap the screen twice to turn the device on. The Notifications panel slides down from swiping downwards in the typical android fashion. Icons have a similar design to those of the S5, with a flat non-glossy appearance.

Antutu, Vellamo and 3Dmark benchmarks were to give some rather impressive results. In the Antutu and Vellamo HTML5 tests the GTel A750 Xplora MX1 is almost on par with the Samsung Galaxy S4. 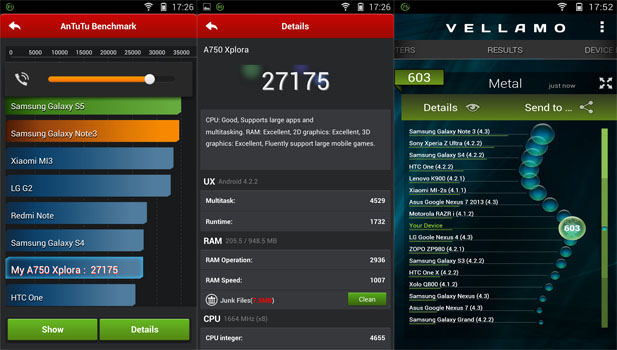 The dialler app, has a simple interface, with the contacts link on the bottom left hand corner. Icons retain the same flat colour used on the main system menu. On the bottom right hand corner, there are three dots which show or hide the speed dial menu. The link to the messaging app is only available when the desired number has been put.

The gallery app has a simple interface with the photos taken via the camera having the largest thumbnail and rest having regular sized ones. The only way to change sorting order is via a tabbed menu that appears at the bottom of a gallery sub folder. Otherwise the gallery app can be best described as basic, and user friendly.

The music app had a rather comprehensive feel to it. The initial sort criteria are: by artist, albums, folders and all songs.  The music app does not automatically detect the music that has just been copied onto the phone but instead requires that a manual scan be run.

This can be accessed via the menu. Playing songs can be displayed as now playing or as a list. At the bottom right of the now playing option there is the DTS settings access. This feature is one that would be like by audiophiles as it offers a chance to play with how the music playing sounds.

The video app is decent allowing touch gestures for brightness and volume control. Other features included are the regular play and skip button and the option to have it run as a widget while one uses the phone for other activities.

The battery on the GTel A750 Xplora MX1 is quite decent and is able to last quite a while with regular use. Battery testing gave at least 12 hours for intensive use (playing video and games while Wi-Fi was on). Which is roughly about the same as the iPhone 5, and with normal use, a full charge would last the whole day and have a couple hours to spare.

This battery performance is likely to be partially attributed to the battery saving app that is included with the default software. The app has active apps run in the background while the display if off thereby saving power in the process.

The GTel A750 Xplora MX1, is a rather good presentation from GTel showing their coming to maturity in the phone industry. However they could have done with less corner cutting on the devices specs considering this is their flagship.

For one, the current industry standard for RAM is now 2 GB. Another area where they could have tried to change things is the memory, with only 9 GB of memory available to the user, taking videos at 1080p resolution is sure to fill the phone memory rather fast and dampen any attempt at recording memories or events.