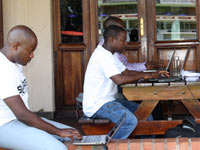 An organisation called World Startup Report (WSR) has released research data they call the “Internet Hall of Fame” which is essentially a report on data from the top 3 biggest Internet companies from some 50 countries around the world. There’s a lot of interesting information about internet companies in general so do go through it, but a few things about emerging and developing regions.

Naspers
Out of the 50 countries on 6 continents reported on, at least 29 have a company with a value of at least $1 billion. In Africa, that’s just 1 company, Naspers, which owns a stake in Tencent (who own WeChat), OLX, Russia’s Mail.Ru goup, India’s Flipkart, and Africa’s Kalahari.com amoung many other interests. But Naspers is more than just an internet company; they own Africa’s top satellite pay TV company MultiChoice as well as print and online media companies. Naspers is worth $46 billion.

The rest of the African internet companies included in the report are valued at less than $1 billion.


You can find the full data set here.

Unfortunately this report doesn’t include some obvious internet markets like Nigeria, Ghana, Egypt, Rwanda. Surely Nigeria has internet companies worth much more than Algeria’s and Ethiopia’s. But before we complain too loud, it’s good to remember than the World Startup Report invites contributions from everyone around the world. People with the correct information should contribute it, or at least create their own reports to reflect what’s going on in their countries.

Looking globally, here’s a presentation with some interesting facts about internet companies around the world:

3 thoughts on “The Internet Hall of Fame: Are these the top internet companies in Africa?”