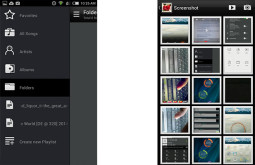 Today we have a device from one of the fastest growing phone manufacturers in the world, ZTE. ZTE has been in the past associated with entry level and mid-tier phones. However they have been making strides towards penetrating the high end market. The Nubia Z5 mini, which we have with us today is one such device. 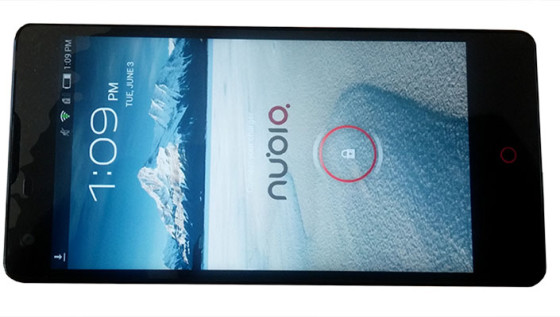 Despite the phone’s plastic back the phone feels well made. The screen is sharp and viewing angles are excellent. The phone does feel a bit heavy and rests well in the hand and is easy to operate. The back has a matte textured finish which helps with grip, and does not leave finger marks unlike glossy finishes. I was worried about the positioning of the camera. While it is slightly below the covers (less than a millimeter) it still is easy for the camera lens to get scratched.

The Qualcomm Snapdragon 600 processor chipset has integrated Adreno 320 GPU, Krait 300 CPU, Full-HD capture and playback, DTS-HD & Dolby Digital Plus audio decoders. The chipset is also used in the Samsung Galaxy S4, so we are expecting some decent performance.

The controls at first glance seem standard, however on closer inspection there is a dedicated camera key which photo enthusiasts would notice makes life a whole lot easier. The key can be used to have an instance of the camera app running. Pressing the key lightly focuses the camera. A long press will then take a photo.

The menu, home and back button are in their regular positions, however ZTE has taken it upon itself to make their access a little harder. As they are not marked in the usual manner. While the screen is off, the buttons are not visible, save the home key, which takes the form of a red circle. The buttons are only visible when the screen is active. The result is an occasional miss when operating the Nubia Z5 mini.

The top of the Z5 mini has an audio jack and the bottom has the USB connector and microphone. On the back of the device there are two speakers which are reasonably loud, the camera and LED flash.

To access the card slots one has to remove the back cover. It has a slot for a mini SIM and micro-SD card, both of which are hot swappable. The battery is none user replaceable, a design reminiscent of Nokia. The back also has connectors for what I assume are antennae.

The ZTE Nubia Z5 mini is using a 4.7” IPS screen with 720×1280 resolution which should give about 312ppi pixel density. This is almost the same pixel density as that found on the Apple iPhones, and slightly better than that of the Samsung Galaxy S3. Indoor and sunlight legibility was rather good, with the screen remaining legible even in noon light. Colours are vibrant with the ZTE Nubia Z5 mini and there are features to allow for image enhancement under display settings.

The ZTE Nubia Z5 mini is packing a 2300mAh battery, which under normal use is able to last the whole day. The one short coming the battery has is that it’s not user replaceable, and given the specs of the device, one would not want to replace the phone simply because the battery had finished. Synthetic tests for the battery gave it an 8 hr rating which would be approximate that of the iPhone 5. The ZTE Nubia Z5 mini also has power save profiles that help manage the battery, and also configure the device to avoid activating the device by mistake.

The user interface is almost stock android with no app drawer. Instead there are multiple home screens which the user has access to. The limit on the home screens is 18, with about 20 shortcuts per home screen. The ZTE Nubia Z5 mini is very responsive, though during initial start-up it might lag for a couple of seconds. Afterwards it operates smoothly.

The lock screen has a hold to unlock as opposed to the generic swipe that most androids use. The notification area comes to the bottom of the phone and can be scrolled sideways. Notifications appear in the large space above.

The Antutu benchmark, 3Dmark and Vellamo were used to rate the ZTE Nubia Z5 mini. Needless to say, the phone performed rather well, being on par with the Samsung Galaxy S3 on some tests. 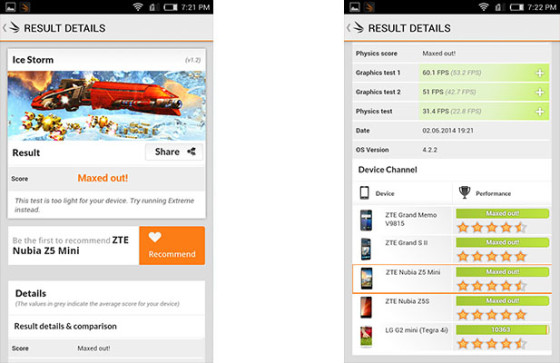 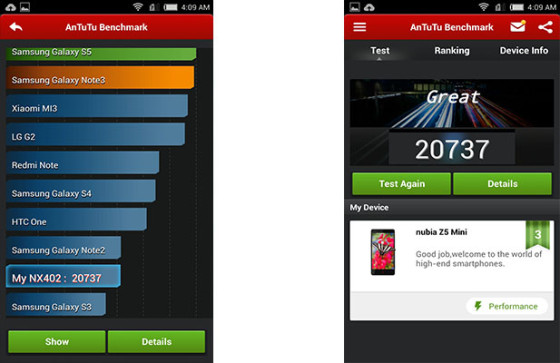 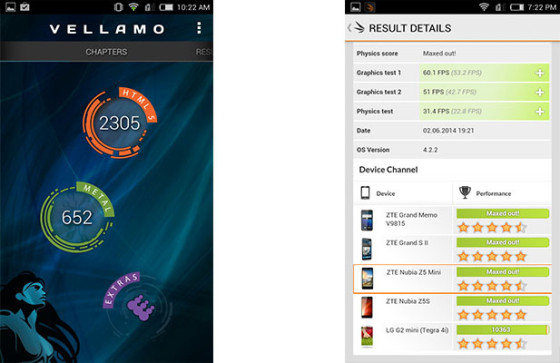 The dialler app has a tabbed interface which allows one to switch between contacts and history. The messaging app is a simple affair, with no difference from most messaging apps save for the icons used. The phone allows one to record calls unobtrusively and both sides of the phone call are heard as opposed to some phones which make a continuous beeping sound while recording and usually will only record the voice of the person one is talking to. 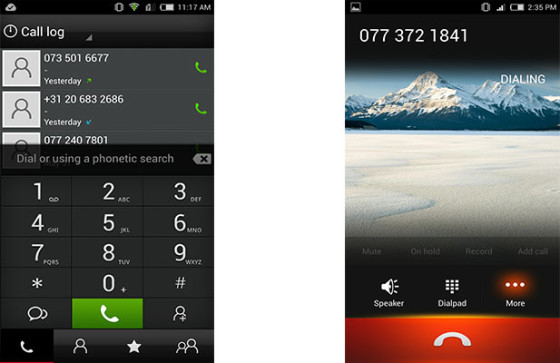 The ZTE Nubia Z5 Mini has a wonderful default music app, which allows one to sort the music by artists, albums and folders. The folders option, I have found is often lacking in most music apps. The result is that if one’s music is improperly tagged, the collection is thrown into disarray by the music player. 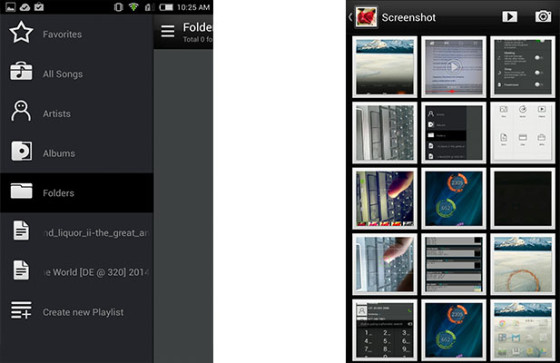 The gallery app is rather interesting. It allows one to group images taken by time and also allows for creation of gifs. This is handy for images taken in sequence, as they can be made into moving gifs.

I found the movie player somewhat under featured. It has the default zoom and only touch gesture related effect is volume control. The file manager has a simple and intuitive interface. It has an option that shows grouped recognised file types and another that allows one to navigate the phones folder structure. On the whole the file manager brings nothing new to the file manager app genre. 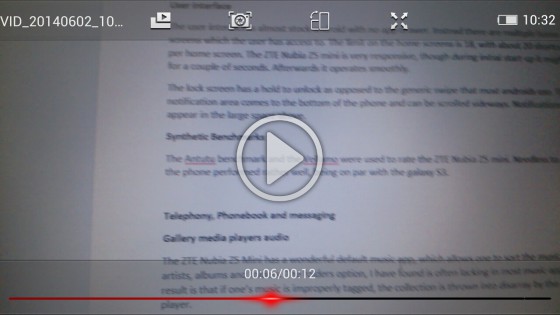 The camera I was most excited about, considering that it has on it a Sony CCD sensor and a 2.2 wide aperture. This is larger than most other phones. The pictures it takes are sharp, but sometimes the focus is off and they come out grainy.

I found I was unable to change from the default resolution to one of my choosing. The camera basically has three pre-set modes, (pro, fun, and auto) these pre-sets cannot be altered, and one is better off looking for another app online to do the job.

ZTE is coming out as a major contender against established manufacturers, and has been named one of the fastest growing phone manufacturers in the US. Now available locally through Econet for $365, the phone is quite a bargain.

Econet is offering the phone with a free feature phone and 50 MB of data for 12 months, making this one of the sweetest smartphone deals around. The only question one is always left with when switching to a new phone is support. Will Econet keep things sweet with support?