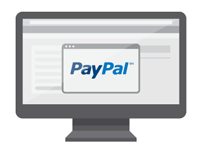 This, it turns out, is a payments week! It’s official, PayPal is coming to Zimbabwe starting tomorrow, 17 June 2014.

The announcement was made today by Rupert Keeley, the executive in charge PayPal’s Europe Middle East and Africa region, in an interview he gave to Reuters.

PayPal will be opening up its services to Zimbabwe and some 9 other countries in Africa and Europe and South America. Notable of those is Nigeria which, even though it has Africa’s highest internet population at above 60 million. The other countries are Cameroon, Ivory Coast, Belarus, Paraguay, Macedonia, Moldova, Monaco and Montenegro.

On why it’s happening now Keeley said: “PayPal has been going through a period of reinvention, refreshing many of its services to make them easier to use on mobile (phones), allowing us to expand into fast-developing markets,”

Part of the realisation ofcourse is that these markets won’t wait for PayPal to come, but will instead go to more flexible competition. And in the case of Zimbabwe, startups have emerged to fill the need for payments online. Like Paynow and Pay4App. Paynow was introduced to the market several weeks ago, and we first reported on it last week.

Unfortunately, not the whole PayPal
It’s not the full PayPal that’s being opened up in these 10 countries. According to Reuters PayPal is only offering “send money” services which means the peopl in these markets will now be able to create accounts using their local addresses and after that pay for services.

The most useful services in terms of building an ecosystem, Peer to peer payments and local merchant accounts, will not be enabled yet. This will clearly not amuse financial authorities in these countries as it basically means PayPal is enabling money to be paid out, but none to be paid in, or at least to be paid within a country. Zimbabwe already has regulations restricting outbound payments, especially those going through remittance companies like Moneygram and Western Union. they have been more relaxed on payments via the web though with Mastercard and Visa payments happening generally unfettered.

It’s not the first time PayPal has relaxed restrictions on markets it deems bad. it used to be that even if you had an account from say America, just the act of accessing your PayPal from Zimbabwe would have you blocked from the service. It was virtually impossible to use PayPal from Zimbabwe unless you were hiding behind a proxy or VSAT connection. In 2012, PayPal relaxed that a bit to allow the use of the service from Zimbabwe. They however still wouldn’t let you sign up for an account from Zimbabwe, or use a Zimbabwean address, essentially only service the needs of expats and visitors.

The recent development is good. Not enough, but better than the madness that’s prevailed thus far. Merchants just need to find a work around the problem of not basing the merchant account in Zimbabwe!

PayPal is not likely to threaten local payment providers like Pay4App and Paynow. The local ones have access to and provide local mobile money payment options like EcoCash and Telecash. Without the full stack of payments, PayPal also comes with very little to be of any current use startups or retailers looking into eCommerce.

69 thoughts on “PayPal now available in Zimbabwe. But not for merchants and peer to peer”