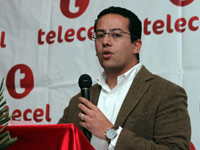 A number of trusted sources inside the company told us and confirmed that an email to staff was sent out yesterday evening by the Telecel Zimbabwe General Manager, Angeline Vere, advising everyone Elguindy had exited with immediate effect. The reason, apparently, is that he had chosen to pursue new opportunity elsewhere.

Normally, this wouldn’t be news. But when people make an effort to reach out to us with such stuff we know better than not to assume something big is going on somewhere.

Unfortunately no one, including official sources, will say why the sudden exit. The curious thing is this is the kind of sudden exit that characterised that of the former CEO Francis Mawindi. He too left in a huff to pursue other opportunities. Only to turn out he had been fired, and that he was bitter enough about it to sue.

We have no idea if Elguindy was actually fired, but it certainly can’t be ruled out. It’d also be interesting to know which shareholders fired him; is it the Egyptians, or is it the local shareholders. Or is it he wasn’t fired but did indeed decide to leave. But who chooses to leave with immediate effect in the middle of the month?

Another reason could be that his work permit didn’t get renewed, but then again, who says someone has to be in Zimbabwe to be the CCO. John Swaim is MD, and he’s certainly not here.

Whatever the reason, life has to go on at Telecel and we’re told Nkosinathi Ncube (the executive leading the Telecash project) will take over as acting CCO.