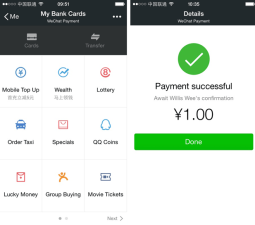 WeChat is many things already. So much more than WhatsApp, the app it started as a clone off. It’s so much more this anti-WhatsApp strength has actually been cited as a biggest weakness. But that’s not stopping the Chinese based messaging startup from becoming even more. The latest is that Chinese users of the app can now use it as a mobile money transfer tool as well.

In China, WeChat are not the only ones gunning for the payments space or the peer to peer one in particular. Sina Weibo, the Chinese Twitter clone, has been testing out user-to-user money transfers in a beta version of its mobile app.

They bring to mind a similar move by a Zimbabwean payments startup, Mukuru, that has done it, but in reverse. The have a thriving remittances platform, and since last year July have made efforts to add social, and messaging features to it.

We sure hope that local mobile money operators, can see that the future belongs to apps, and that if they are to be relevant in that future, they have to be there now.

2 thoughts on “WeChat is now a mobile money transfer app as well, but in China only for now”