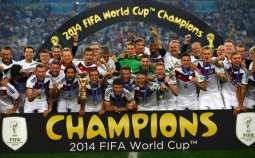 This was a very special world cup for me. It’s not every day that all your football wishes come true: a highly competitive tournament where even the minnows could bruise the egos of big teams, a humbling of the Brazilians ( I stated my dislike of them in an early article) and the team that I have supported since 1994 lifting the trophy for the first time since I was three.

If we are to be truly honest, Germany is not a country whose players are blessed with individual brilliance. They have no national icon like Neymar, nor do they have a Messi who can turn a match with his dazzling brilliance and genius, or a talented Ronaldo. No. What they have is a team which is held together by great awareness, thrives on sheer grit, a lot of running and cunning.

Before each match they analyse the strengths and weaknesses of their opponents and choreograph a response. That means analysing billions of data points.

This feat was difficult to complete in 2006, when paper was still the tool used to analyse matches.They have excelled at past competitions but failed to take home the silver because they lacked the X-factor-Match Insights.

Apparently their world cup success is owed to a 12th man in the form of their Big Data analysis software called Match Insights. The software crunches video data from on-field cameras which have the ability to capture thousands of “data points” every second which would typically include things like player position, speed, passing accuracy and distance covered.

The data from the cameras is then fed into a database which is then analysed using the software and the results are output onto players’ mobile computing devices-usually tablets.

The software can be “focused” by coaches to allow them to use it to develop certain specific areas in the team’s performance. For example, according to SAP’s Nicolas Jungkind, this year Germany’s main concern was to increase their speed.

The Germans successfully used the software to cut their average possession time from over 3 seconds to just over 1 second. This allowed them to blitz past the Portuguese and Brazilian defences with deadly effect.

The software even allows the coach and technical teams to focus on individual players in the team thus identifying areas they need to improve on.

For example, the creators of Match Insights quipped, say the coach wanted to improve Thomas Mueller’s speed,position and possession time (if you believe that such a thing is possible given how Mueller has been playing), the technical team would digest the Mueller’s data using Match Insights and then send the analysis video to Mueller’s cellphone.

This is what sets the software apart from other similar software, information is presented in graphical easy to understand formats, for example in the form of video game like presentations.

Those who have watched them play will tell you how very choreographed each of their set piece takings was. For example, the software told Mueller to tumble during the match against Algeria-in a failed deliberate effort to distract the opposition.

Using a similarly cleverly, choreographed movement in the opposition’s box, Mueller scored a brilliant first goal against Brazil. It also made sure Klose scored a goal against Ghana with his first touch after telling him exactly where to be and what to do ;).

Prior to the match with Brazil, the German team, had reportedly, spent years working with College students gathering data and intel on the Selacio. As part of their preparation against South American teams Germany utilised a giant database put together by over 50 students from Cologne Sports University (Deutsche Sporthochschule Köln .)

This information was supplemented by information gathered from scouts and was then fed into the magic database, crunched using Match Insights and the result was a 7-1 trouncing of Brazil and a World Cup triumph.

In addition to becoming the tournament’s top goal scorer and Klose breaking the goal scoring record, Germany became the first European team to win the cup on American soil ( Geo lesson Brazil is in America too!).

There is a reason why they call it the German machine. In Germany Football is not a sport it is engineering and like any other form of engineering it benefits immensely from technology. They use it to blood their team.