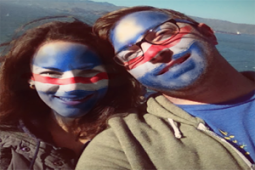 The 2014 FIFA World Cup has broken all barriers by all social media perspectives. So it’s not surprising that every social media platform is trying, through engaging campaigns and services, to squeeze as much of the football flavour as possible before the final whistle later this month.

The latest is the face painting feature from Google+ that allows you to paint your favourite team’s country flag onto a photo. This can be a photo of you and up to four friends.

This is done by taking a photo and sharing the photo on Google+ with the hashtag #Paint and the name of the country in the knockout round; for example #PaintZimbabwe (a wishful example at that). When you check back in your stream some minutes later the face(or faces) will be painted with the country flag of your choice.

This sounds cool if you want to share your enthusiastic support for any team that’s made it to the knockout stages by posting an image that makes you look like a true bearer of the team’s colours. With all the teams I was rooting for knocked out already I would be thrilled if they have the same feature for other cups and tournaments ( think UEFA Champions League)

It is remarkable how Google is doing all that it can to keep Google+ going. As a casual observer I actually assumed the social network was dead in the water. I don’t know that many people who use it as their primary social networking or messaging platform.

Google has however insisted otherwise, citing the growth of its communities through Google+, YouTube and Blogger as reasons why more investment (and features) are being put into it.

Google+ and these other services is where a lot of the tech giant’s social networking efforts lie.Yesterday Google even announced the shut down of its first social network Orkut, which was ironically popular in Brazil and India, opting instead to keep Google+ afloat.

It looks like the 50.4 % of Orkut users from Brazil will have to migrate to Google+ and other online communities. The face painting feature will likely be a hit with them as the World Cup rages on.