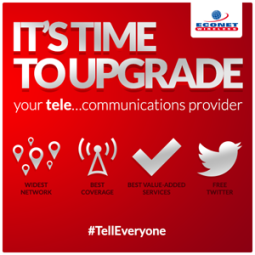 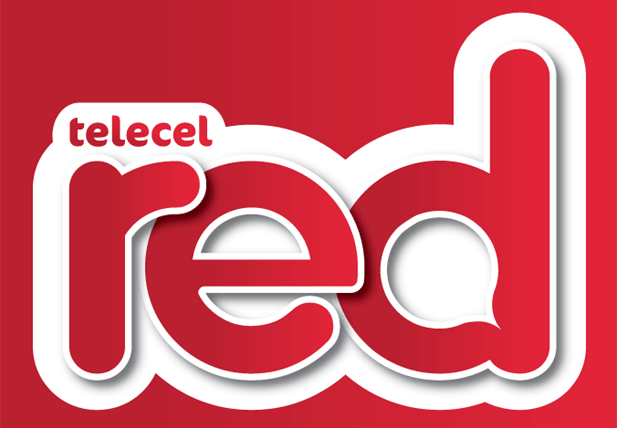 It all started with Telecel’s successful rebranding exercise in February 2012. The network operator managed to craft a tagline, “Go Ahead, TellSomeone”, that effectively combined their brand name with a viral marketing concept to their user experience that every user had to “tell someone” about.

NetOne, in what seemed like a quest to create steam for its own brand “rediscovery”, took a swing at this new brand identity and catchphrase by using its own “Don’t Tell Someone, Tell Everyone” tag.

This took different forms, including most recently “Share with EVERYONE.”As a dig at its closest rival it was, at its very least, playful and in many ways an indication of where the NetOne team’s core competitive focus lies.

A couple of days ago this telecoms brand #tellall took a new twist when Econet announced a one month, zero-rated Twitter special. As anyone would expect, this promotion has been largely boosted through social media, particularly the Twitter platform itself. Econet, taking a leaf from NetOne (or should I say Telecel?) kicked off the Twitter promotion with a tweet that read “Now you #tellsomeone” 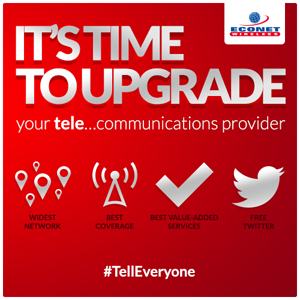 This really wasn’t much of a big deal really. It’s common practice as Twitter is an open platform that is best suited for such word play and brand taunting. Hashtags are fair game.

Econet however has carried this #TellSomeone tussle onto its ad campaigns for the Twitter promotion and other services.

Econet’s latest ad is a more deliberate jab at Telecel, combining a red background(Telecel’s corporate colour) , a highly suggestive word reference to Telecel (“Its time to upgrade your tele…communications provider” Seriously?)  and of course the #TellEveryone tag.

As far as legal implications are concerned Econet and NetOne are well within their rights. Telecel does not have any copyright to the phrase TellSomeone. This explains the extensive use of the phrase and its likeness from the two competitors.

Granted there are no legal ramifications from all this but one would expect more from NetOne and especially Econet as the market leader. Although It’s now evident who is being viewed as serious competition by both these operators, there seems to be a lack of creativity if these two cannot come up with their own one liners. So much for being “Inspired”.

Telecel is however taking this quietly and “charging it to the game.” According to one Telecel official this whole #tellall ad storm conducted by NetOne and recently Econet is an expected aspect of a competitive telecoms environment.

Telecel is yet to offer an official or ad related response to the actions of both Econet and NetOne. It seems it’s not bothered and can justifiably state how imitation is the greatest form of flattery.

Do you think that there is anything wrong with the smart ad approach being used by Econet and NetOne? Should Telecel respond in any way? You can leave your comments regarding this issue in the comments below.

19 thoughts on “Telecel #TellSomeone, imitation is the greatest form of flattery”