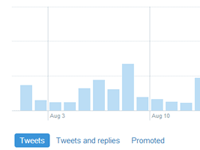 It’s been a while since I was excited about the usefulness of Twitter to businesses this side of the world. They have opened up Twitter Analytics to every Twitter account. Anyone can now check analytics.twitter.com to see which of their tweets performed well and which where ignored. You can see the impressions, the engagement (clicks, replies, retweets etc…) over a month and compare that with the previous month. You can even drill down on specific tweets and see their performance over time. Awesome!

Analytics on Twitter is not itself new. It’s just that previously it was only open to accounts advertising on the platform. This was a problem because to advertise on Twitter you have to be in one of its major markets like the US, EU, South Africa etc… So essentially the rest of us out here in small markets like Zimbabwe, just had to go on whatever analytics our Twitter client (Buffer, Hootsuite etc,…) provided.

We’re sure Twitter’s motivation is more a revenue opportunity than just making Twitter more useful. Once they see which tweets are being read and which ones aren’t even accounts that are not exactly business can consider promoting their tweets to reach more people.

Are Twitter analytics any useful to you? Do you care finding out if your tweets are being read?

2 thoughts on “Twitter Analytics: Now you can know how your tweets perform”