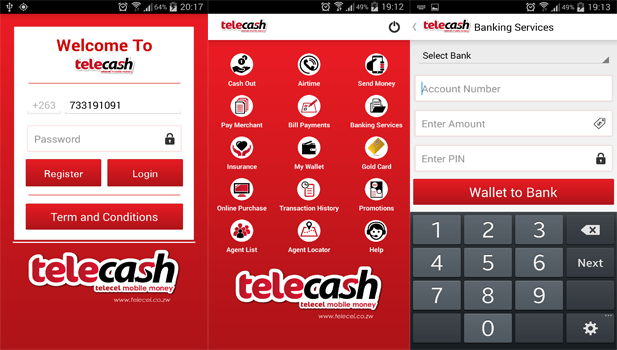 The application, which is available for download on the Google Play Store, gives telecash subscribers a faster and easier transaction option for the usual mobile money activities like money transfer, airtime top-up, payments(bills and merchants) and banking services. 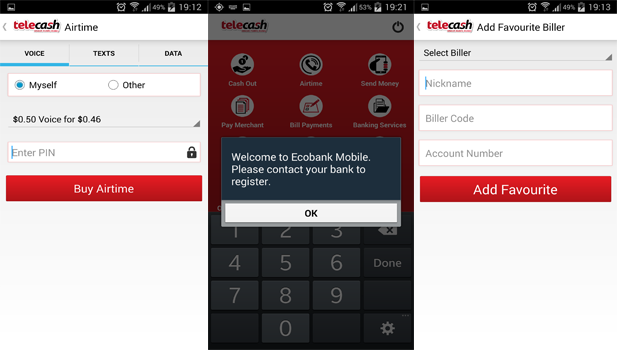 This app has the same operational value that EcoCash subscribes have been enjoying with their own official Android application which was introduced in March this year. Most of this app’s functions are also the same USSD options that were also covered by the ZimCodes application which is a common platform for all local USSD codes.

Besides a more detailed user interface Telecel has also added some other functions on this app that haven’t been available on the other mobile money apps we have seen locally.

There are options for the Telecash Gold Card (blocking and unblocking it?), Online Purchases (this option welcomed me to Ecobank Mobile and referred me to the bank to register), Telecel promotions, an option for insurance payments (for various providers including CIMAS not just Zimnat the new telecash bedfellow) and a list of Telecel agents. 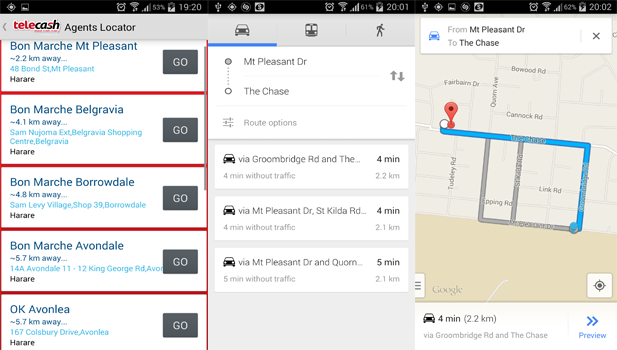 One other interesting feature that Telecel added on is the agent locator option. This helps a subscriber identify, via GPS, the closest telecash agents and offers the closest route, in typical Google Maps fashion.

Its pretty obvious that Telecel have taken time to offer a more elaborate application than what has been offered by their competition Econet. This is the one advantage that Telecel is playing as the runner up in product adoption for mobile money, This was also seen by how telecash came in with solutions for the shortcomings that EcoCash had in terms of user friendliness.

According to Telecel’s new Head of Financial Services, Arthur Matsaudza, their team is working on an iOS app for telecash which is set for release in the short term, with plans for a crossover application that caters for other mobile devices shortly after that.

You can download the telecash Android mobile app here.

What are your thoughts about the app? Will you be using it if you’re on telecash? What services would you want them to add to it?