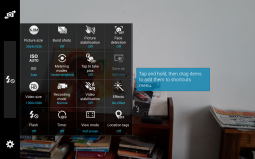 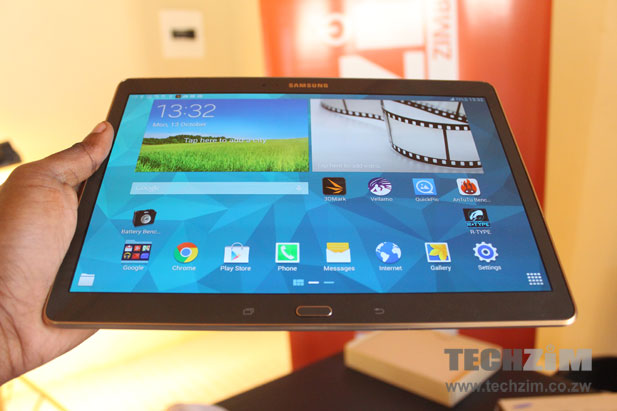 The gadget for the following review was sponsored by Goldtech Electronics Zimbabwe.

The world of tablets has been filled with budget and mid-tier spec devices and every so often we see a tablet rising above the rest to battle it out with Apple on the high end side of things.

This time around it’s Samsung entering the slugfest that only Microsoft, Apple and Sony have been willing to take part in over the last couple of years. Samsung’s weapon of choice is the Galaxy Tab S.

Samsung has released the tablet in two sizes, the 8.4 inch and 10.5 inch. The one we had for review was the 8.4 inch version. For some reason Samsung gave the non-LTE versions the Exynos chipset, and the LTE versions get the Krait variant.

This is an important point because the Exynos chipset offers decent performance, but is occasionally buggy. Hopefully some of the past bugs have been ironed out considering the time they have had with the chipset.

The device has been given high end specs, which include, 2,560 x 1,600 Super AMOLED screen and a 6.6 mm thick body. The Tab S also has a fingerprint reader and some software freebies like 50 GB cloud storage with Dropbox.

The packaging includes manuals, charger and connector cable but no earphones. I found it odd that their top tier tablet with telephony would not have hands free kit included, more so considering that the tablet has no proximity sensor.

The Tab S is surprisingly thin and light, given its size. The back of the Tablet has a back similar to that of the Galaxy S5 which is nice to hold and gives a feeling of having a sure grip. 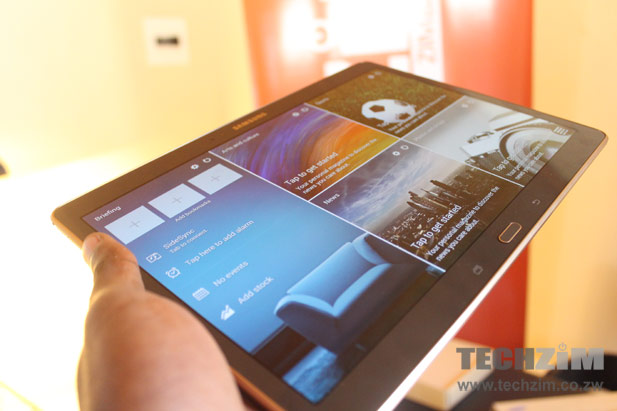 The stereo speakers are along the sides of the tablet. The result is that, while they produce good sound, the sound is somewhat projected away from the user, however this is still better than most other tabs that have rear mounted speakers.

On the front is a 2 MP webcam and the rear has an 8 MP shooter. On the bottom you have the headphone jack and a micro-USB socket. On the right, you have a power button, volume rocker, micro-SD reader capable of up to 128GB cards and an IR blaster (this nifty little feature allows the Tablet to act as a remote control for most home entertainment devices). One thing to note is that on the back of the device is what Samsung has dubbed, “simple clickers” that function as attachment points to the various optional cases offered by Samsung.

Samsung decided to go all the way with the display leaving even the Apple iPads with their retina displays in the dust, with a screen resolution of 2,560 x 1,600 and a pixel density of 360ppi. This translates to a very crisp display with spectacular visuals. The screen brightness is also top notch, viewable even in direct sunlight, a weakness of most displays that the Tab S easily overcomes. There is an RGB sensor as well which adjusts colour balance depending on your environment meaning the colour balance images or videos viewed almost always appear correct to the eyes.

Normally the camera on a tablet is nothing to write home about, but with a crisp bright display and 8MP shooter the Tab S is handy to use capture those interesting moments. The colour production seemed good, only when taking shots in the evening, i.e. low light shots did the image come out grainy. 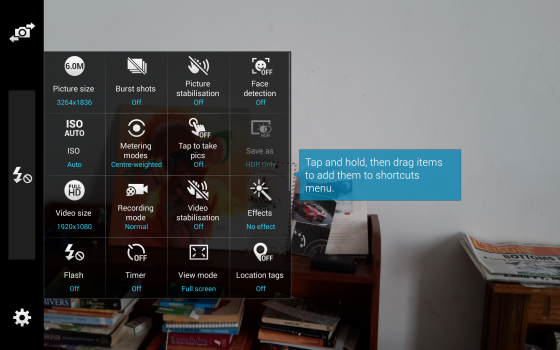 The camera allows you to adjust ISO levels and choose whether or not you have flash. It now also includes modes that were previously on the phone models including Panorama, HDR and dual camera. 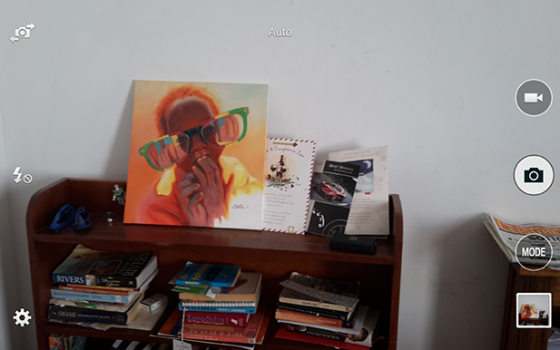 To record video you just tap the video icon and it starts recording, rather than having a switch where one would then have to tap the record icon. this shows some thought behind utilising the extra screen real estate. The video recording was smooth at 1080p, and the picture clear.

The Interface is very similar to that of the Galaxy S5, with notifications and quick setting available when one swipes from the top. Instead of Google now, one gets Samsung’s My Magazine interface when swiping from the left, as on the Galaxy S5. The My Magazine interface is running on top of Android 4.4 KitKat. Also included are the usual Samsung extras and well as some that are included for the first time on Samsung Tablets. These include S-Voice, Multi Window mode for viewing multiple apps, Milk Music service, Smart stay and Smart Pause.

One of the big features is the multi-window mode which is something that was available only with Surface tablets from Microsoft, thereby making the Galaxy Tab S a better productivity tool. Apple only just got into this area, so I think it’s good that Samsung is going the extra mile to make their tablet a much more valid choice when choosing tablets. The only issue is that at the moment, it is mostly Samsung apps that can use the functionality, hopefully with time the features will used by developers with their apps. 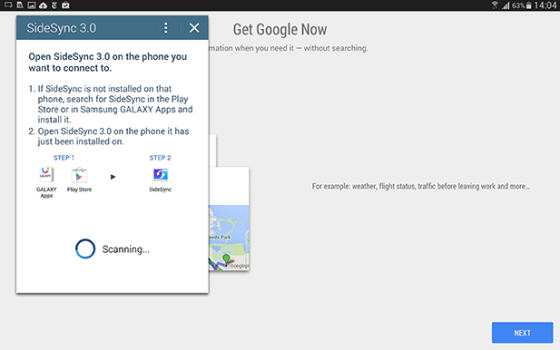 A new version of their SideSync app is available which allows for transferring of files between the Galaxy Tab S and your phone. On the Galaxy S5 you are able to transfer calls from the phone to the tablet using Wi-Fi. Other software included is for magazine readers and news bulletins which normally are under subscription, but with the tablet come with a limited subscription option. 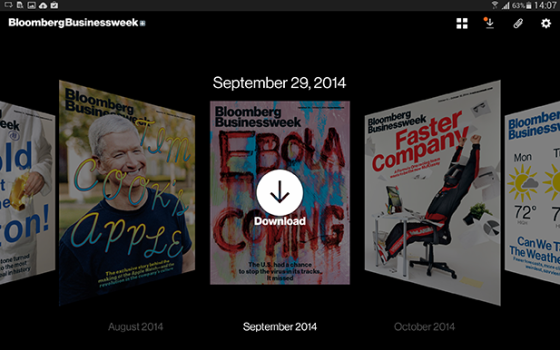 Dropbox storage is included and gives you 50GB storage for two years. Kids mode is also included but does not come pre-installed, one has to download it. Multi user mode is available and allows the Galaxy Tab S to have multiple accounts each with a separate password etc.

Normally the review would be on the media players, but in this particular instance the best thing to give is the experience with media playback. This is mostly because of the great screen. 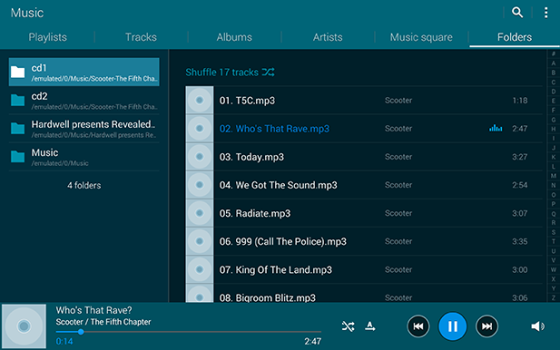 The speakers on the Galaxy Tab S are quite loud despite their positioning and the screens vibrancy and colour are second to none. While you can use the tablet for productivity, the truth is it excels at media playback as well. 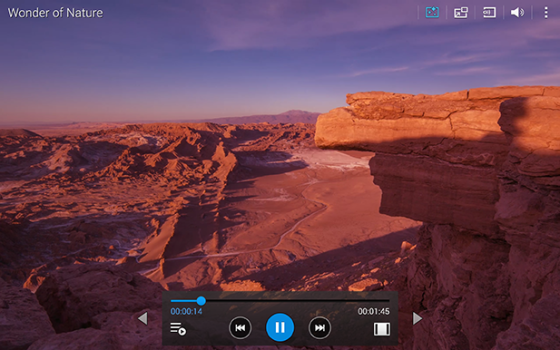 The gallery did show a bit of lag when loading hi-res images but otherwise the experience was good. The media players are gesture sensitive, removing the need to always tap the screen to show buttons.The only limit was with MKV support which still is lacking on Samsung devices. Something overcome by apps like VLC Player.

Test scores from Antutu, Vellamo and 3D Mark rate the tablet well, with it running smoothly through the 3D Mark tests without stuttering even at the highest res available.
Antutu 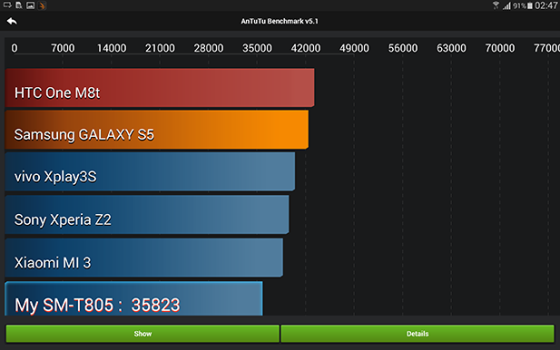 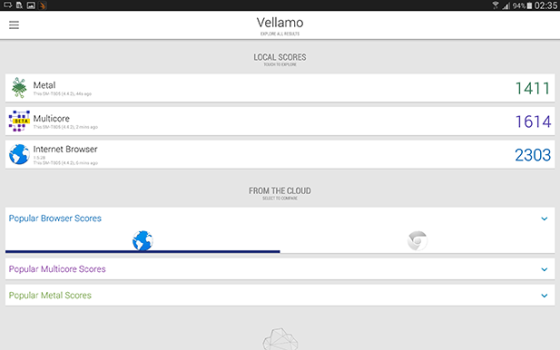 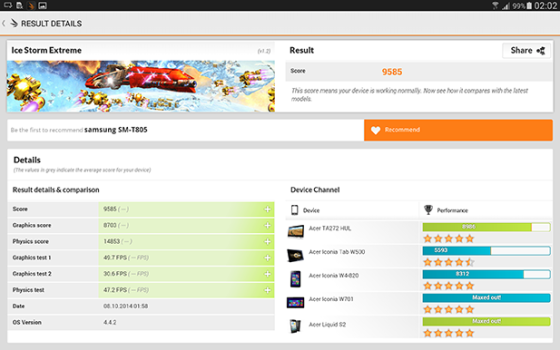 The dialler app is the same as that on the GS5, with changes only for the screen size. This was left to last because it seemed about the last thing one would get the tablet for. 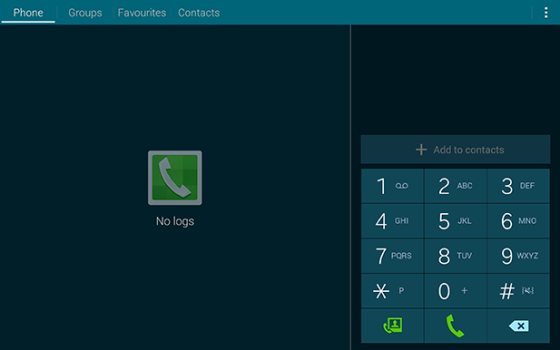 One other area to commend Samsung is on the battery, I’m pretty sure you can go a whole day with normal use with the Galaxy Tab S. Running a one hour FHD video only took the tablet down 8% giving about 12 hours use watching video. For regular tasks a full day’s use will drop the battery to around 55% from a full charge. Ultra power saving mode, a feature first seen on the Galaxy S5, is also available on the Tab S and this mode makes the battery last much longer than normally possible.

In the battle for high end specs of the tablet market, Samsung has come through shining. There are a few short coming here and there, mostly not Samsung’s fault but mostly to do with the android platform maturing. These are the multi window support, and the general support for large screens on android. Otherwise from design to performance I would say the Apple iPad has a worthy competitor. I believe any Android lover out there looking for a tab on par with those from apple would be happy with this buy.

4 thoughts on “Samsung Galaxy Tab S: the return of the screen king”