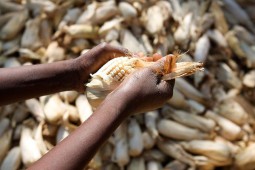 The internet contains a lot of information about almost anything under the sun, and indeed the entire universe-the sun itself included. Information on things African however tends to be less abundant,  is sometimes scant and often non-existent. In fact there are way more articles about the moon than there are about Zimbabwe. The folks at Wiki Loves Africa are in a mission to remedy that however.

Being cognizant that Africa’s citizens are a little less enthusiastic or unable to share details about their life and culture online, Wikipedia launched an annual media (photos,video and audio) contest called Wiki Loves Africa.

This year’s competition started on 1 October and will end on until 30 November. There is a specific theme set for each year. Examples of themes include “markets, rites of passage, festivals, public art, cuisine, natural history, urbanity, daily life, notable persons, etc” This year’s current theme is “African Cuisine.”

The expressed aim of this year is to:

document in the form of various media, the diverse types of cuisines across the continent of Africa. The theme will encompass the “foods”, “dishes”, “crops”, “husbandry”, “culinary art”, “cooking methods”, “utensils”, “food markets”, “festivals”, “culinary events”, “famine food” and any other issues related to cuisine on the African continent.

According to organisers of the project, one of the reasons why information on African topics is scant is that most people on the continent do not even know that you can edit and create wiki pages on the pages.

Personally I think that is disingenuous considering the number of blogs on African subjects on the internet. I think African people’s reluctance to edit the Wiki has got something to do with the overly complex editor, a Western-centric committee that oversees the site and occasionally impose their views on topics.

To solve the issue of a complex editor the Wiki Loves Africa team has come up with a special overlay that will allow contestants to upload images without worrying much about technical requirements.

There is also a special oversight team that includes a Zimbabwean born Capetown (South African) citizen Isla Haddow-Flood. The official website is also in English, Arabic and French allowing for wider participation. I guess Mozambicans and Angolans are not invited to the party.

For some reason I cannot still fathom why people in the West and Hollywood in particular seem to think these are the only countries in Africa-if you include Nigeria. But then again these are the people that think every bomb has a red dial and makes a large ticking sound.

The absence of Zimbabwe on the list does not mean that you cannot participate, you can still participate by uploading a picture of your Sadza and Derere but you will have to fund the project on your own because non focus countries do not receive funds nor do we get local event organisers or “in-country events. “You will have to read the rules and English tutorial here before you participate.

Hopefully you will participate in the competition and aid in bringing more information about African cuisine onto the internet. I am a terrible cook myself so I will stay out.