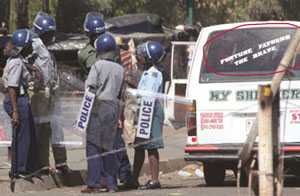 In Zimbabwe corruption has certainly gotten out of hand, particularly police corruption at police road blocks/checkpoints.

With the introduction of mandatory traffic spot fines for all traffic violations in Zimbabwe, the local police force has become more forceful and aggressive in their conduct during these stops.

This is worsened by the fact that the national police force now relies significantly on ticketing to raise funds for most operational costs after the government admitted that it had limited capacity to fund their operations.

Because of this, our police officers now have the right to collect fines; this is a very unusual and worrying mandate that has seen many police officers abusing this new found power to extort helpless road users.

To ensure some modicum of accountability, police officers who accept spot fines are mandated to issue out a ticket, which also serves as a receipt, the logic being that the payment is put on record and therefore becomes technically traceable and verifiable.

Some police officers have found loopholes through this measure by allegedly counterfeiting ticket books or not declaring paid up tickets.  Some “sources” allege that officers often alter the ticket amount and offence on the remaining copy of the ticket and then pocket the difference.

This is all compounded by the fact that our police force does not seem to have any means of verifying these tickets after they are issued. I can imagine that once a ticket book is used up it is simply tallied and thrown onto a pile somewhere until it is later thrown out to make room for the next pile.

I could be wrong, in fact I hope I am.  What this could mean is that once you have paid an admission of guilt ticket, there is no way to verify if it has, in fact, been declared to the state, and if your alleged offence has not been altered. Faced with this uncertainty and inability to verify receipt of their fine, most motorists would rather pay a bribe to make it all go away. 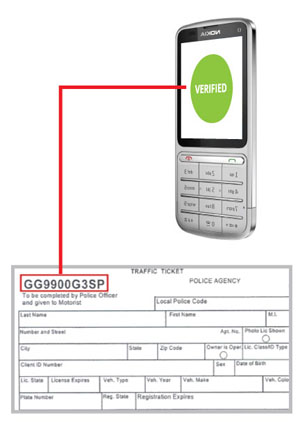 The last thing that most people want to do after being detained and harassed at a traffic stop is to oblige the officer by paying an admission of guilt fine for a dubious offence.  But because the officer has the power of the law and time on his side, one ends up obliging anyway.

Once the police officer has taken your money, for most people the least they expect is for that money to be declared to the state. The police force has admitted that in many cases the money never reaches state coffers.

This has seen many traffic officers accumulating tremendous wealth at the expense of law-abiding citizens.  Currently there is no way to check if your ticket has been put on record and the money forwarded to the state. It got me thinking; what if there was a way? Well I think there is.

The solution is simple and relies on simple data capture and a centralized open public database. The first step is ensuring that the police force captures all traffic offences onto a centralized database. This is a common practice elsewhere.

At the end of each shift, or in real time, a police officer must be required to ‘book’ all issued citations onto a centralized database stating the perpetrator, vehicle registration, offence and fine surrendered to the state.

What this means is that at the end of each day or in real time, police HQ, traffic safety council, VID, revenue authorities and central government are able to track how much money the police have collected that day, and the profile of offences and violations on our roads.

Recently the Zimbabwe Revenue Authority indicated that the ZRP collects up to $7 million in spot fines, most of which is unaccounted for. With our public database that problem will be curtailed in many ways.

Even if all offences are recorded, there is no way of verifying that the data recorded by the officer is true to facts. Corrupt officers could still alter the ticket amounts and offense at their pleasure. Unless, of course, the public could verify this.

This is where a simple USSD app comes in. Once issued with a ticket, amendments to the law should require that within 24 hours, an issued ticket should be part of the public record, at which point a member of the public can query their ticket number to verify the record.

To protect the anonymity of perpetrators, the returned information should only show the recorded offence, booking officer, booking officer’s force number as well as the fine collected and surrendered to the state.

If a person issued with a ticket discovers that is has not been recorded or that the offence has been misrepresented or that the fine amount has been altered, that person can take their copy of the ticket and report the discrepancy.

This way if an officer of the law collects money from you, you will be able to ensure that it reaches central government and no corrupt officer benefits personally.

While this USSD app can help aid transparency there are still plenty of other loopholes that can be exploited, however, this is a simple solution that could go a long way in giving law abiding citizens the tools they need to hold public servants accountable and to keep abuse of power at bay.

What else do you think can complement such a tech solution? Do you have other suggestions for curbing Traffic Police corruption? Please feel free to share in the comments below.

31 thoughts on “USSD can kill roadblock corruption, here’s how”