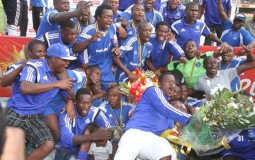 In case you hadn’t heard or if you missed out on the noise in the streets on Sunday, Dynamos Football Club won another league title thanks to a victory over How Mine and ZPC’s fall to Caps United at Gwanzura Stadium.

On one side of the street you had Caps United fans celebrating, somewhat reluctantly, their victory over ZPC which had resulted in the league landing into their rivals hands. On the other side you had countless Dynamos fans celebrating a fourth consecutive title.

With all the noise generated in the real world and online, it’s safe to assume that Dynamos is the most visible sports brand in Zimbabwean football and sports. There’s a lot of brand capital here that extends to the digital world so why isn’t Dynamos exploiting it?

As a lifelong Dynamos fan I’m saddened by the fact that all the glory that our team has reveled in isn’t documented anywhere. After 21 league titles and the bragging rights for being the local club that has gone the furthest on the continental stage, we still don’t have a Dynamos website.

There is no place online where all these victories or the people behind them are celebrated. We still have to look at a profile on soccerway.com to get a sense of what Dynamos is all about. The other alternative would be a Wikipedia article which is hardly the most reliable source as it could have been penned by an Al Ahli fan out rewrite Dembare history.

Before we wait for a local tech entrepreneur to figure out the opportunity that lies in harvesting facts and data on local football clubs (something that would kill a tonne of sports bar arguments) can’t Dynamos have at least some sort of landing page? The different possible domain names are still available after all.

Looking beyond the sentimental notion of the Dynamos website there is of course the revenue opportunity that comes from a well managed website and digital presence.

Yes, it’s easy to talk about pages like Dembare dotcoms (and now some fan driven sites like Dembare.net) and how they give Dynamos fans a meeting place and voice, but lone-standing fan pages have never been known to pay the bills.

For a club beleaguered in financial challenges, a well crafted digital campaign centred on a single property like a website could provide an added revenue stream that could help offset some of these challenges.

All this is possible through merchandising and advertising, something that feeds off the huge fan base and brand visibility that Dynamos has. This is assuming that revenue inflows are the challenge here.

All this is hardly rocket science or out of the box thinking. These are the same models that have been carried by other clubs with a more aggressive approach to branding and the financial implications around it.

I have to take my hat off to other local clubs like Highlanders that have sought to establish an online presence with their own site, and others like Caps United have now got an Android app. (I’m yet to use it myself though) There’s hope that other clubs will come around.

In the meantime we will wait for the very late adopters like Dynamos and other digitally anorexic top flight teams to work on some of these small things before next season. Who knows, maybe some fans might do something like that out of the love and passion they have for their clubs.

How do you think Dynamos and other local clubs should use tech to discover new revenue streams?