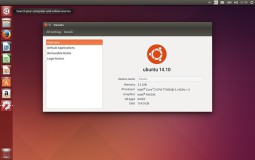 Just over a week ago Canonical the people behind Ubuntu released its latest iteration of its flag ship operating system nick named Utopic Unicorn. The release also coincided with Ubuntu’s 10th birthday.

For an operating system named after a magical creature, the release might strike some of you as somewhat overwhelmingly similar to the previous release, Trusty.

It’s the same creepy default wallpaper (if there is a difference I failed to notice it), the Amazon icon remains firmly conspicuous in the launcher despite protests and there is the same old universal purple shade.

Looks can be deceiving however. While it is true that the latest release does not bring with it a dash of cosmetic changes it does still pack a lot of under the hood changes.The most important, at least for me is that the latest release now allows you to enjoy Netflix and all its glorious offerings officially without the need for any unpleasant hacks as I have already explained here; using HTML5.

There are the natural upstream upgrades for most of the software bundled with Ubuntu. There is a new version of LibreOffice now 4.3 which fixes an 11 year old bug that now allows you to create paragraphs of more than 65 000 characters. I have always preferred Google Drive myself not that I have ever tried creating such a mammoth paragraph.

The GNOME elements have been updated in line with the upstream upgrade. Rythmbox, Firefox and Google Chrome have also been upgraded. It is the Chrome update that now enables you to use Netflix.

Unicorn also has a new kernel which means more device drivers. So if you were having some problems with your hardware when using the last release this might just be another reason for you to upgrade.

Developers, especially Android developers, have a lot of reasons to cheer at the latest release. Utopic is the first version of Ubuntu to come with the the Developer Tools Center.

The tool was developed to make it easier to set up a development environment on Ubuntu with special emphasis on developers of Android apps. The tools center project allows for the quick creation and deployment of Android apps on Ubuntu.

With the rise of both “official” high end and the Chinese low level entry Android phones in this country this might just be what we need to lure more people into development of local apps which would be useful to the local populace.

The Center is already available in the official repositories to install just type the following command in your terminal:

It has also been reported that this version uses less resources that the LTS but I could find no evidence of it. It felt and worked the same way, although the system responded a little bit faster. Maybe its the under the hood tweaks or my imagination. I have never been wowed by benchmarks, only actual usage is of concern to me.

When upgrading to this new version, bear in mind that the support period was reduced to 9 months only for non-LTS releases a while ago so you will have to be prepared to upgrade again in April next year.

This release has been dubbed “a calm before the storm” much in the same way Lucid Lynx was. Vivid Vervet (15.04) will be a radical shift from what you are used to. So you have been warned.

You can download the latest release from the ZOL Mirror here. The Yo! Africa mirror does not yet have the 15.04 mirror but that should be rectified soon.

What are your own thoughts on the new Utopic Unicorn?