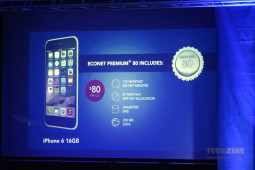 So, Business Partna is out. In its place comes Econet’s new “contract” (postpaid) service called “Premium”. The Business Partna brand, according to Stan Henning at the launch of Premium yesterday, sounded too much like at an enterprise package, so they needed to bring out the sense it was for high value individual clients too.

Premium is a lot like your typical packaged contract service of this era; a fixed monthly fee for a package that has a voice component, data and unlimited SMS ofcourse. In terms of what’s already on the market, the structure is very similar to Telecel’s Red service.

With Econet Premium you get two categories: either just Premium and you bring your own device to the network (that iPhone 6 your US cousin smuggled into the country, or is planning to later this month), or Premium Plus and you get your device on the contract. Both are 24 month contracts.

If you choose to bring your own device, here’s an idea of what’s on offer:

If you’re getting a device from Econet then you have the range Econet has been selling except this time you also get an iPhone 6 and iPhone 6 Plus if you prefer Apple’s latest. This time from highest to lowest:

There’s actually a third category (the most unattractive in my opinion, but maybe that’s because I don’t sit at the top of the food chain at some big listed company) called Premium Unlimited, designed for guys that never watch their balance, or even get to see their monthly bills – this type of guy the MNOs love ofcourse!

We’re still looking at the numbers to see if there there’s something in there you readers should rush for and buy. So far, there’s nothing we’re excited about. And actually we don’t think it’s Econet’s fault; they’ve had to adjust their offerings because of the realities of regulation and taxing of the internet and airtime that our government has decided needs to be done if an economic something called ZimAsset is to be accelerated! Madness in policy, begets madness regulation, which begets madness in pricing, itself begetting other ugly scenarios in a vicious cycle. Yes, that’s indeed how economies get accelerated, to their knees.

But back to tech: here are a few more pictures from the launch of Premium yesterday. We follow later with another look at the long term of Prepaid vs contract, maintaining ARPUs and please do bring your own device from wherever it is your cousin is making a living.

23 thoughts on “Econet kills the Business Partna brand, replaces it with expensive “Premium””