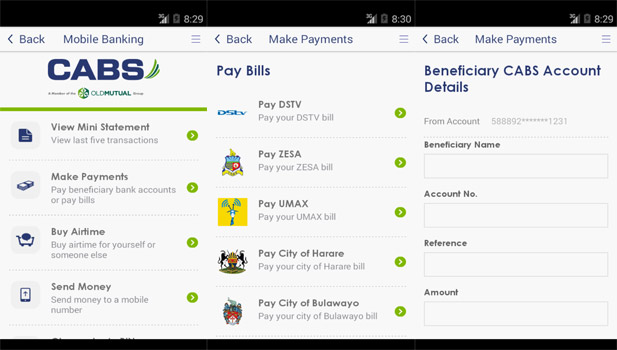 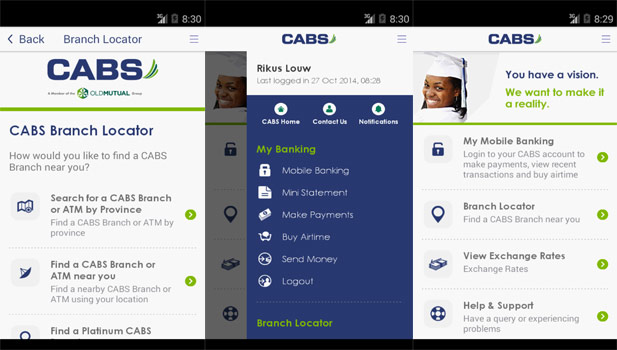 Let’s face it, anything that makes the processes involved in banking any easier or faster is always a winner. Safe to say that tech has always been expected to be the one thing that can do this.

For local mobile banking solutions the case for making life easier usually involves using a USSD driven solution, something that has involved arrangements with the MNOs. Oddly enough, besides guys like Barclays Zimbabwe other local banks haven’t been keen on making mobile banking apps, until now.

The CABS Mobile Banking App was introduced today as a bridge into mobile banking for all account users that have mobile internet access. It’s available for CABS account holders that sign up for the mobile banking option. These are the people using the USSD powered Textacash service.

What sort of services does it offer?

The services available from the app are pretty much what you’ll find on any decent banking app. Like the Barclays Bank App you can transfer funds to other accounts (any bank actually, it’s not restricted to CABS), send money to a mobile number, make airtime purchases (all networks), use the branch and ATM locator and handle bill payments (DStv, ZESA, Umax and City of Harare and Bulawayo).

There are YouTube videos that have been created to explain how each of the CABS Mobile Banking App services work which can be accessed by following this link.

Is it a case of too late or too soon?

It’s about time. CABS has had its hand in mobile banking for a while now with the Textacash. The service has been rather successful and popular as well with over 306,000 users. It has helped contribute to the bank’s decent performance (CABS was judged to be the most profitable bank for 2014 in the Banks and Banking Survey 2014)

So if Textacash has won the hearts of a large segment of their clients and is contributing to the bank’s performance why do an app? Doesn’t USSD cover more people anyway, including the 85% that does not have smartphones?

It looks like this is part of a product extension that CABS had promised for a while. The bank introduced a refreshed corporate identity in July this year with a renewed focus on its customers. It looks like services like the app are meant to amplify that focus.

The CABS Mobile Banking App also seems like a good way to engage clients that already appreciate the convenience of mobile banking and steer them in the direction of internet services that will eventually take over where USSD is leading now.

There’s also the huge factor of ease of use that USSD does not have. An app handles any transaction faster than any USSD session.

A positive move is the app’s cross platform availability. It’s available for free download for iOS, Android, Blackberry BBOS and also on feature phones like Nokia and the Asha range. It’s available in the respective stores and also on www.cabsapps.com. CABS has also offered free WiFi in its branches that clients can use to download the app.

What are your thoughts on this new mobile app and its services?

21 thoughts on “First impressions of the CABS mobile banking app”