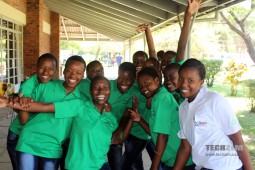 There were a lot of winners today as the FIRST LEGO League Zimbabwe tournament came to an end this afternoon in Harare.

After a full day of displaying their skills and challenging each other to do a lot with their imagination the Dragons team from St George’s College took home the main prize.

They were however other prizes given out to other teams for their efforts. The other awards given out included:

Teams like Orange from Gombo Primary School received special mention for a spirited performance considering that they had only been introduced to basic computer skills three weeks ago which were a prerequisite for learning the robotics.

Below are some of the image highlights from the day.