Selling ZESA prepaid from the UK: How Zympay is disrupting money remittances 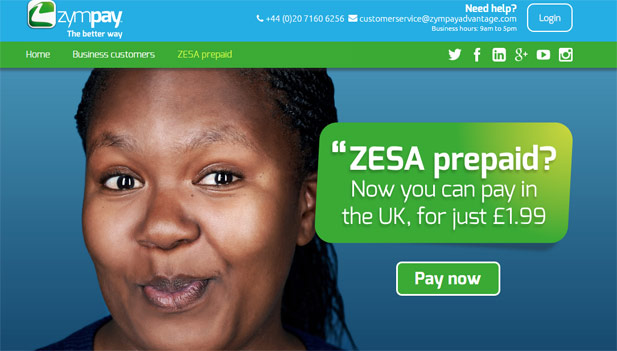 Just yesterday we were tallking about recharge.co.zw, the online workaround for buying ZESA prepaid electricity that lets you use your EcoCash and Telecash mobile wallets as well as options like VISA and Zimswitch.

It turns out that there’s another solution similar to this called ZymPay. Unlike recharge.co.zw, Zympay is targeted at the diaspora, where Zimbabweans who handle bill payments like ZESA for folks back home have to remit money to a recipient who will process the payment.

This conventional route means passing the funds through money remittance agents like Western Union or World Remit which has a cost attached to it and makes the process a lot longer.

Zympay on the other hand allows a user to handle the purchase of the ZESA credits online via credit card. The recharge PIN is sent to the user via SMS and from there its just a matter of forwarding it to the Zimbabwean user. The transaction costs £1.99 and the service is currently for UK residents only.

Just like recharge.co.zw the system is an impressive way to beat the hassles of lining up for ZESA prepaid tokens but more importantly it has a value proposition for UK based Zimbabweans that have to handle obligations like ZESA for loved ones at home.

Besides dodging high remittance costs there’s the comfort of knowing that you haven’t passed on money to a third party that might not always have the sincerest intention with your remittances.

This is the same value proposition that has been offered by services like insurance aggregator Zimselector which allows Zimbabweans around the world to compare and buy insurance products for local assets.

Its ZESA payment service has taken centre stage and comes off as the lead service for Zympay Advantage. This Advantage is a service suite that lets UK based customers pay for products and services locally like rents, insurance and utility bills, all the while avoiding expensive money transfer fees.

The money is in the diaspora, not formal remmitances

All things being said, Zympay is coming in with a smart model to cut into the remittances market. Despite the focus on ZESA prepaid the bigger play here is handling the many forms of remittances that are being channeled from the UK to Zimbabwe. ZESA bills are just one of the many obligations that the diaspora takes care of for their Zimbabwean kin.

With a reliable platform that offers a cheaper way to send the money home anyway (paying does it better than sending it as cash) there is a huge market to tap into for Zymstay or anyone who seizes the opportunity.

Latest reports are that diaspora remittances dropped to $900 million in 2014 from $2.1 billion and $1.8 billion in 2012 and 2013 respectively. According to the National budget this figure is expected to drop to $840 million this year.

All this is happening in the face of more money transfer agencies, something that some believe indicates how the diaspora is avoiding expensive formal channels of remittances. Which means that anyone with a cheaper alternative for moving money across borders either as money or as a payment will tap into a very lucrative market.

This model looks beyond the traditional remittance angle that EcoCash and Telecash were scrambling for from the end of 2013 and well into 2014. That’s not to say that there’s no money there. A billion dollar market cannot be ignored after all.

However the realities are that the formal remittances pie is shrinking and where the money is vanishing to is where the market should look.

Perhaps NetOne should look at expanding its OneWallet along the same ZESA payments angle and pivot from there into a larger force in mobile money related remittances? Or even better still, any entrepreneur that understands a business which handles a lot of funds from the diaspora can set up his own platform, without any mobile network.