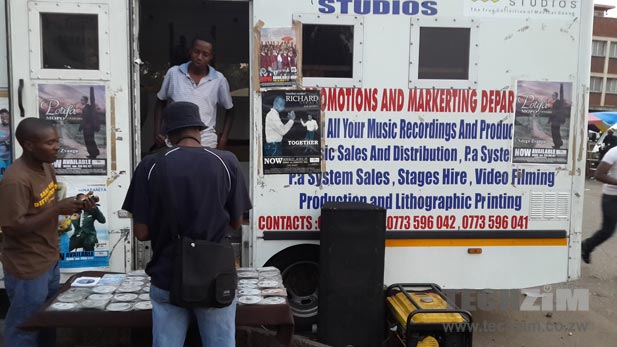 Another revenue stream for Zimbabwean music can’t hurt, right? That’s what everyone has said over and over again. It’s just that the options that have been working elsewhere aren’t catching on in this market fast enough to disrupt our flourishing illegal music distribution circuit.

As part of the fight against piracy ZIMURA (Zimbabwe Music Rights Association) decided to make its own solution with a music streaming and download solution in partnership with mobile operator Econet. Although the service is still under development it has already gained mainstream media attention.

When we spoke to Henry Makombe, the licensing manager from ZIMURA, he explained how they were actually focused on two separate applications; Zim Tunes and Mhanzi. Both are set to be available on the Econet platform with access being granted through music bundles.

They have brought on two technical partners, Logical Systems and CyberCard, (headed by artist and tech entrepreneur David Chifunyise) to handle system development.

How do the solutions work?

The first app, Zim Tunes, is a web based solution that allows a user to stream local tracks and download any of these available songs which can then only be accessed on the device they have been downloaded on. If a track is shared the receiving device must access an account with active music bundles to play the track.

This is largely similar to the unlimited streaming service launched by Tanzanian Mobile Operator Tigo in partnership with Deezer, a global player and one of the more visible music streaming services in Africa.

In the case of Tigo, a partnership was also struck with Africa Music Rights for access to local and African music which extends the playlist to over 30 million songs, a concept of content expansion that ZIMURA has said it will explore at a later stage.

Solution number two is Mhanzi (Music Hub Application in Zimbabwe), a mobile app (it is set to be launched for Android first) that allows the artists to create personal pages where they upload their own content and related material.

Through an account the artist can monitor, in real time, the distribution of his/her content that takes place through downloads (which can be paid for through EcoCash, TeleCash, Nettcash and OneWallet), the recorded streams and the plays of tracks registered on different radio stations.

In case it sounds familiar to you, Mhanzi works just like the Astro Mobi Store solution which was met by some apprehension by local artists. As anyone can guess buy-in from content creators is something that ZIMURA clearly has a one-over the Astro team.

This solution, which sounds intriguing because of the platform creation opportunities, has involved the collaboration of music broadcasters, content creators and ZIMURA as the music rights monitor with a keener focus on mopping up revenues lost through unpaid royalties.

Will this catch on in Zimbabwe?

Both solutions sound like great ways to create revenue for artists and it’s easy to bet on ZIMURA and Econet (or any other mobile network) to figure out the music streaming/distribution puzzle.

The partnership reels in aggregated content (thanks to a ZIMURA artist collective), a widespread distribution network and a solid brand (courtesy of the network). Together these elements normally present a major headache for anyone trying to sell or distribute music in any part of the African market which is largely mobile.

That’s not to say other streaming options won’t work though. Services like Simfy, iROKING,  Spinlet, Rara and Mziiki have managed to establish a foothold in Africa without a “Strictly Mobile Network” strategy which prominent services like Deezer have relied on for entry into the continent.

Locally, music streaming has always been frowned upon because of the high costs of data outside bundles that mobile subscribers (who form the majority of internet users) have to bear with, just to access music. This hasn’t deterred other Zimbabweans from giving it a shot though as evidenced by apps like the Zim Dancehall app and AfriStream.

Other music distributors like ZimboMusic have been focused on digital sales, an established order that music streaming has been bent on obliterating from day one. One wonders if such startups will pivot towards streaming if and when it takes off locally.

Too early to bring out the bubbly?

For the artists all this sounds like a sweet deal. The idea of passive rewards for sweat poured into content creation beats having nothing at all which has been the case with piracy. Besides, the digital monitoring of royalties from broadcasting partners adds to the appeal. No doubt it would be great to rely on something other than a demanding live performance schedule for revenue.

Even looking at the Mhanzi App and its potential as an ecosystem also shows how more value can be derived from artistic brand value, something that only a few artists appear to be leaning on in the current state of the local music industry.

However there’s a lot that still needs to be observed in this whole frame before anyone starts eyeing huge rewards. This model will require a massive promotional drive from everyone involved.

The product being sold here is still the music so the same dynamics offline still apply here. The record just doesn’t sell itself, even on the Econet/Telecel network. It will also likely be a great option for more prominent and established acts and artists, something that is characteristic of streaming in any market.

Another inherent flaw is a reduced revenue share that comes with a crowded territory. This proposed model has the mobile network, the technical partners and ZIMURA all coming in before the money gets to the artist.

According to Makombe the revenue share will be fair, but if the case of superstar Taylor Swift who rocked the boat by rejecting Spotify and music streaming is anything to learn from, the artist always gets paid last in the digital age.

Do you think this approach from ZIMURA and Econet will disrupt music distribution? Will the market move away from streetside music vendors and stream or download tracks legally instead?