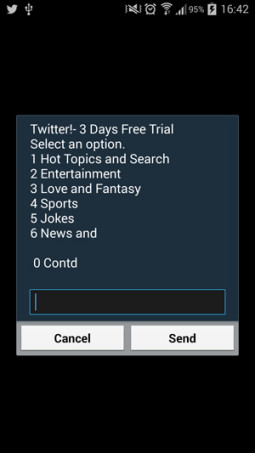 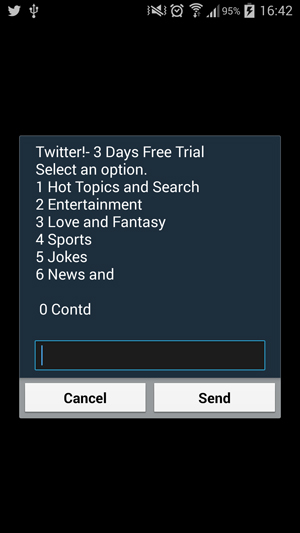 How relevant is Twitter to Zimbabwe? Is the #Twimbo community not growing fast enough? it’s hard to say really, but it would seem that mobile operator Econet is making the biggest effort to get as many of us on the social network as possible.

This time it’s through a Twitter via USSD service. We got a tip from a member of one of our Techzim WhatsApp groups who received an invite to try the service on the *515# extension.

Assuming that after this trial period the Twitter via USSD becomes premium, it would be an attempt to draw much welcomed revenue from a service that has probably been experiencing a boost in numbers thanks to offers like the Free Twitter campaign.

If you add this to our country’s  low smartphone penetration rate then you have a hazy picture of where the value lies in making a USSD product out of the micro-blogging service.

After giving it a go there doesn’t seem to be much that can be drawn from it at this stage. As a trial version, there seem to be a couple of nuts and bolts that need to be tightened first. It’s either that or the service, which likely came from an external development unit, isn’t too user-friendly.

This is accentuated by the fact that Twitter draws a lot of its potency from the rapid tweets you get to see as a comprehensive feed on your screen. There’s also the huge deficiency of images and new add-ons like group chat and video, which is now at the forefront of social media engagement.

Putting Over The Top (OTT) services, particularly social networks, on USSD is hardly news at this point. Econet has already put Facebook via USSD on the market, and in markets like India operators like Tata DoCoMo have had been using both Facebook and Twitter via USSD services since 2011.

Interestingly, the Tata DoCoMo services have the same USSD shortcodes, which might suggest that Econet has contracted the same Value Added Service development unit that worked in India to bring in first the Facebook and now the Twitter via USSD service. If that isn’t the case then whoever developed it copied everything including the shortcode.

Wouldn’t it be a boost for local developers if all these mobile network operators would rely more on local talent for some of these services? In Econet’s case, EcoSure which was developed by a local team bears testimony to what can be delivered.

Econet subscribers can access the Twitter via USSD trial version on *515# What are your thoughts on this service?