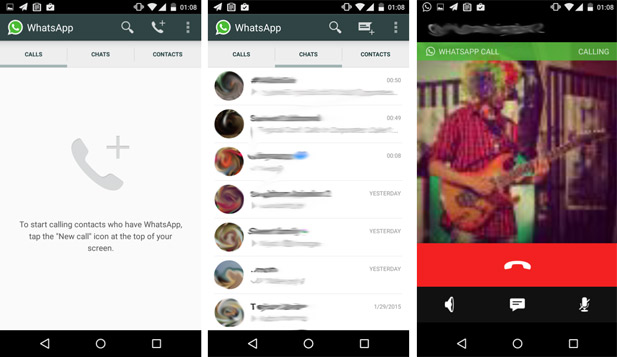 So WhatsApp calling has finally arrived. So far however, it’s only showing up for some Android users who have the latest update of the WhatsApp application. “Latest” in this case means so new it’s not available in the Play Store yet. It has to be downloaded off the WhatsApp website here (Version 2.11.508 is the latest).

The new voice calling feature was first revealed on Reddit yesterday by a WhatsApp user in India. To have the calling activated, one has to be called first by someone who already has it activated on their app.

WhatsApp voice calling will likely further agonise mobile telecoms operators who are already reeling from the assault of the WhatsApp text messages. Whether voice calling is as effective as the text as a communication alternative, is however not clear because good quality voice calls also depend on good quality 3G or WiFi for those lucky enough to have access to it.

Another factor making voice calling more complicated that simple text messaging is it will also likely heavily depend on the capability of the device, which may explain why WhatsApp moved to ban users that were accessing the service via Java feature phones.

A lot of operators in developing countries had started offering separate access to WhatsApp use on a flat monthly bundle price. Depending on the ‘success’ of the WhatsAp voice calling in reducing the regular operator’s voice service, this development may see them either withdraw the WhatsApp bundles or just review the price upwards. And even if the price is reviewed upwards, subscribers with access to good mobile broadband may still find this cheaper than per second billing of voice calls offered by many operators right now.

Voice calling via an app, by the way, is not a new thing. Viber, Skype and other have been doing it for years. What makes WhatsApp a big deal is that ‘everyone is on WhatsApp’, and such a network effect is a game changer for apps depending on connecting users to each other.

33 thoughts on “WhatsApp calling has started. But only for some users. How will operators react?”