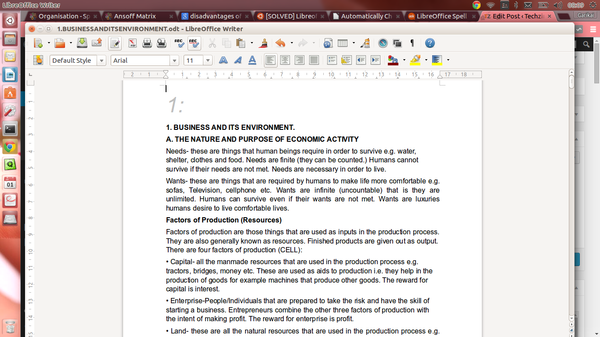 OK before I say anything else I feel like I have to say this: I love Ubuntu (of course I don’t like Mint and their insidious plans to take over the world – first it was MintMenu, and now its Cinnamon! What’s next?)

I have been using Ubuntu since Feisty Fawn and have lived through it all; the closure of Ship-It, the awesomeness that was Lucid Lynx, the taking away of our rights to easily change the GDM theme. Even when every traitor, a list that included Linus Torvalds, was cursing Unity and Gnome3, I stood by my distro. I boot into my trusty Ubuntu 14.04 about 90% of the time.

So whatever I have to say, I say it with love. Unless you are a caveman, LibreOffice kind of sucks. More especially if you were reared on the eye-hurting candy that is Microsoft Office. For all their faults, the good people of Redmond know how to make a good office suite and any die-hard Linux will have to concede the fact that even though it is extremely useful, LibreOffice is no match for, say, Office 2013 – in terms intuitive design, accessible features and, well I just have to say it, icon design. I will not mention the limited number of extensions and templates when compared to Office.

Today I just discovered another problem to add to a growing list. You see, normally I avoid LibreOffice except for the simplest of tasks, but this time I had no choice, owing to power issues, my ISP’s base station kept going offline so I couldn’t use any of my favored options: Google Drive or Office Online, which left me stuck with the LibreOffice.

But for all my brilliance, I am such a klutz when it comes to spelling and typing. I am over-reliant on spell checkers to highlight all my literary transgressions and my suspicions were roused once I reached three paragraphs of text without the familiar red line appearing anywhere in my text. Not even under the usual British spellings which I use instead of the  US English ones, a deed which usually draws the ire of spellcheckers which stubbornly believe cheque should be spelt “check”. Clicking on the ABC spell checker icon showed no spelling errors even though I could spot a few errors by eye. It would seem LibreOffice’s spell checker does not work out of the box, or maybe it’s just me.

I know how much newbies detest and rail against this but the terminal is the most standard way to fix things in Ubuntu. So you need to open a terminal and install the following packages:

This installs the US English spell checker and the necessary Dictionary Word file (wamerican-large).

Here are a few things you need to understand: there are several American Dictionary Word files viz: wamerican, wamerican-small, wamerican-large, wamerican-huge,wamerican-insane and wamerican-med. As the affixed adjectives describe each file contains an increasing number of words which means they will consume more disk space (by that I mean a couple of megabytes more) so choose the one you want but wamerican-large would meet most needs while wamerican-small would suit you if you were a pre-school kid. wamerican-med is full of all those tongue twisters that Doctors like to throw around-in Grey’s Anatomy, House MD and Saving Hope so if this is your thing then by all means install it.

If you are one like me and prefer the Queen’s English instead, you can install: wbritish-small, wbritish-large, wbritish-huge or wbritish-insane instead or in addition to the wamerican files. If you prefer the language of the stereo-typically docile Canadians (perhaps it’s because they are always buzzed on their famously cheap pharmaceuticals) you can always install the wcanadian files instead. In fact you can install any of the w* files by typing: sudo apt-get install w and hitting the tab key to view the available list of options and unless you are planning on writing ISIS a letter you most certainly will be content with the above options.

NB; Once you have installed the packages mentioned above you will have to restart LibreOffice for the changes to take effect, no need to restart the entire OS as would be the case if you were using that other one. You might also have to go to Tools>Language>For Selection and select your preferred Language for the spell checker to work especially if you have installed several languages. To begin spell checking just click on the familiar ABC icon in the tool bar.

A toss to the death of unassisted writing.

16 thoughts on “LibreOffice kind of sucks, but here we are: Spell checking with LibreOffice!”