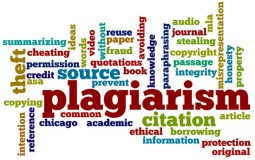 Over the past year or so, stories of blatant plagiarism have become a common piece of conversation in Zimbabwean social media circles. Local bloggers have been victims to what they claim outright theft of their journalistic and creative works, with the mainstream media being the main culprit.

Techzim for instance, has discovered volumes of its articles republished without permission nor attribution on The Manica Post and The Chronicle. In some cases, new media publishers have also been in the mix and recently, Techzim also discovered an original photo cropped, resized and reused – all without permission or attribution – by New Zimbabwe, a UK based news publisher.

In the case of New Zimbabwe, the photo was cropped to remove the Techzim watermark seal that says “this is Techzim’s intellectual property” which in our eyes translates to mischievous theft.

This sort of nonsense was also observed from The Herald Sport when they cropped, edited and re-published a photo belonging to Schools Sports Network (ssn.co.zw), another new media publisher focusing on schools sports.

Both the Techzim and SSN issues were eventually resolved with an apology but because blatant plagiarism is still happening locally and appears increasingly frequent, it is clear there’s a huge ethics and culture rift between legacy media and new media.

This is not true. The footer of the Sunday Mail article had Toppindula.com instead of top.pindula.co.zw as the source. On the web version of the article on the Sunday Mail did not have a supporting link to the original source. This meant that readers could not visit the original source of the article because there was no link and the “attribution text” was done wrong.

This sort of sloppiness only shows that The Herald Entertainment only cares about grabbing great content. Crediting the source property is not priority.

The irony of all this, especially when old media is concerned, is they have for decades used material from news agencies like Reuters, freelance journalists and freelance photographers. They have done a fairly good job in crediting the sources and paying accordingly, but all changes when it comes to internet bloggers.

Fungai Machirori, founder of Her Zimbabwe thinks it’s a culture clash where on the one hand old media thinks they are doing bloggers a favour by giving them an audience, and on the other hand, bloggers rightly see themselves as alternative media directly competing with incumbent media companies like The Herald.

“It also seems like an undermining of what is called citizen journalism or blogging in Zimbabwe. There seems to be this clear division between who can be called a journalist.

A journalist works in a newsroom for a news media organisation and if you are doing your blogging or citizen journalism, people don’t see that we the same level of prestige or they don’t honour it in the same way. So I think it’s an issue of perception of the local citizen journalist space were if you would not do that to AFP or Reuters, why would you do that to a local person?”  She said.

Fungai Machirori also recommends that media houses first give the original content creator enough time to for its traffic cycle.

“A lot of the time what you’ll find is people will take content which has been posted 12 hours ago. You need at least 3 days for a content cycle to go through from the initial burst and the people who come on 3 days after. Then after 3 days, I think it’s only courteous for you to say can I republish this content and maybe give it new life on your platform”. She said.

If all ethics, courtesy and being human fails, Fungai says publishers can approach the Voluntary Media Council of Zimbabwe and file a complaint against the plagiariser. However, because the Media Council is voluntary, there is no real punishment for the offender.

“What we are starting to hear more people agitate for is payment. Payment is almost the only way that you’ll get the media to really understand that you can’t abuse content and get away with it through an apology in tomorrow’s paper.” Said Fungai Machirori.

Plagiarism has been topical in the new media circles in Zimbabwe. Techzim, TBWA Zimbabwe and AMH will be host a new media focused conference called Digital Future to help bring conversation on how media has evolved under the influence of the internet and to explore best practice both in terms of business models and content protection.

Digital Future will be held on the 17th and 18th of March 2015 at Cresta Lodge, Sango Conference Centre in Harare.