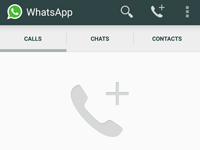 So, since yesterday, we’ve been calling friends using the new WhatsApp calling feature. What we were curious to test is ofcourse if the WhatsApp Calls feature is the big disruptor to the mobile operators that it’s been hyped to be. That WhatsApp Calls are some special thing we don’t have already in the form of Facebook Messenger, Viber, Skype etc…

So far, sadly, the conclusion is that WhatsApp calls are only good when you’re on a high speed WiFi connection. In Zimbabwe at least.

We tested WiFi (fibre) to mobile (3G, Edge etc…) as well as 3G to 3G and we couldn’t hold one conversation. The call connects and rings yes, but on answering the call, the app doesn’t get into conversation mode so you never hear each other.

We’re defaulting this to the fact that we have very poor mobile internet – I hardly get a good Econet data signal at my home in Harare, I have to place the 3G modem on big stick or in a tree for data. Yes, seriously. And it’s been like this for over a year now! The failing WhatsApp calls are just confirmation how bad it is.

A call to friends and family in South Africa and Botswana (MTN &  Orange respectively) network however was flawless. We experienced the “better than a regular” voice quality everyone’s been talking about.

I hope WhatsApp fix this soon. In fact, I expected better from them especially after they made the world wait so long, presumably while they made the most data connection smart app ever. Not so smart it turns out. At least not yet. I’m able to make calls on Viber, Skype and Facebook using using my current 3G mobile internet, so there’s no reason WhatsApp should fail to nail it.

As for the question of how big a disruptor WhatsApp calls are: that regular mobile voice calls (and therefore revenue) are taking a hit is obvious, but how much of that hit is going to be compensated by the rise in data usage is unclear for now. As one colleague at an operator in Zambia said today:

Data elasticity is also higher as more content gets consumed (virality) imagine talking to you friend excitedly about something then sending them the link, picture or video — they are less likely to ignore you. However, the problem/limitation is devices – by now Skype for mobile would have nuked us – and networks (3G/WiFi) are still limited in bandwidth/reliability.

What’s been your experience? Are you able to call and talk to contacts that are using 3G, Edge etc…?

Update: We just communicated with Econet and they told us their staff are making calls and receiving them fine over 3G. The problem, said the representative is probably just poor signal in some areas. Full article here.

36 thoughts on “WhatsApp calls not working on 3G, EDGE connections in Zimbabwe”