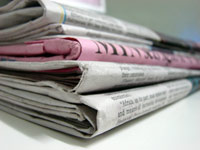 This article is a guest piece written by Marvin Madyara, the founder and Editor of The Ambassador Magazine and director of MGX AFRICA. He can be reached at marvin@theambassadormag.com or tweeted here: @ambassadorzw.

Yesterday I attended an event called Digital Future, a gathering of digital minds who come together annually in Zimbabwe to dialogue and share ideas on all things digital (marketing, broadcasting, publishing etc.)

Digital Future is a TechZim and TBWA Zimbabwe initiative, sponsored by NetOne, one of Zimbabwe’s 3 mobile operators. This year’s event was officially opened by the Deputy Minister of ICT, Win Mlambo. The forum is running for two days at the magnificent Cresta Lodge in Eastlea, Zimbabwe.

I will not talk about digital broadcasting or digital marketing which are some of the topics / sessions I missed at the conference. I nonetheless attended the digital publishing session, where my welfares are grounded.

In such gatherings, even internationally, there will always be an eruption of that aged boring and sometimes intriguing debate, Print versus Digital. Is print dead? Is Digital the future and so on?

I loved the selection of speakers chosen by organisers. One of the speakers who spoke on this enthralling subject is Darlick Marandure, CTO of Zimpapers and Acting GM of Star FM. Zimpapers is the largest media house in Zimbabwe and Star FM, one of the few radio stations in the country.  In his presentation, Marandure’s message was: “Print is not dead per say, but needs digital. It’s not about Print versus Digital anymore, but Print and Digital.”

As a passionate print and digital publisher, I do agree with Darlick. I believe these two mediums have a lasting yet evolving thick as thieves bond.

Putting digital aside and focusing on Print, I always want to decentralize. Print is diverse, up its shelve is Newspaper publishing and Magazine publishing. Yet, I feel placing Newspapers and Magazines before one firing squad is a bit unfair, in our case particularly. These two totally different print entities have singular jurisdictions, with newspapers sadly holding a domino effect over magazines.

When we talk of print dying to digital, we should be very clear. In my view, when death eventually comes, print Newspapers will die first while magazines shrink. Yet another thought, if print dies, Newspapers will resurrect as TV news channels while magazines transform into radio and TV magazine shows, vlogs and blogs etc, a movement already in motion.

We might debate all year about who has a better future between print and digital, but the world has no time to waste. The fight is no longer about print and digital, it’s all ink under the digital bridge. It would never be called a bridge, if there was no water running under it, would it? So, in irony, these two (Print and Digital) are like one hearted Siamese twins. If their heart stops pumping, they both die!

However, If I’m to sadly accept the “print is dead” ideology, it would be on just one circumstance, “death by game change”. And indeed, the game has changed, it is no longer about traditional marketing and old fashioned advertising space or special supplements. In comes content strategy, crowd sourcing, multi-channel plat forming and so forth.

There’s a lot I could share on how the Digital Future event opened my mind, but I will have to stop here for now. So the question that stood before, still stands, Will print die? I say maybe, maybe not! If it dies, then how? Of old age I guess! When Print does eventually die, her grave will read;