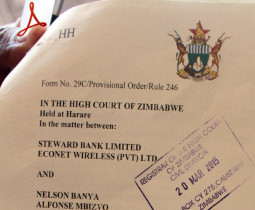 The Herald reports that Reuters affiliated online news agency, The Source, this week failed to have their case referred to the Constitutional Court. The referral case was heard by Justice Joseph Musakwa (the same judge that granted an order to have them raided by Econet) and refused to do so on the basis that The Source undermined the authority of the court.

They undermined this authority apparently by writing to the Sheriff and the the police asking them to not execute the raid order.

In addition to this setback, The Source have been asked to pay Econet and Steward Bank the legal costs of the matter thus far. Quite a bummer if you were the Source, but also quite expected if you ask the same guy who asked that you be raided to refer the matter to someone else for “better judgement”.

We don’t imagine that The Source is not going to pursue this case further ofcourse.

Get some background on this issue from these articles we wrote before:

3 thoughts on “News agency, The Source, fails to get Econet case referred to Con court”