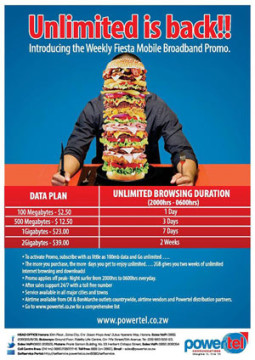 Remember how local Internet Service Provider, Powertel, made the biggest pricing mistake in telecoms last year when it scrapped its superstar unlimited package and opted to introduce a usage-based system instead. Well, the ISP seems to be fighting for customers’ attention with its new unlimited package.

Before you get excited, there’s a bit of a caveat to this new unlimited package which has been dubbed the Weekly Fiesta Mobile Broadband Promo. First, it’s not as spectacular as the old unlimited package.

It only allows you unlimited browsing during off-peak hours (8pm to 6am), like the off-peak unlimited browsing option introduced by uMax last year. There is also a set number of days you get this unlimited window, based on which data plan you choose. The table below gives a breakdown.

Apparently Powertel is trying to increase its value proposition to its subscriber base that felt cheated when it killed its unlimited offering that, for a while, stood out as the most cost efficient access to unlimited internet.

While it’s too late to say whether this is going to be huge hit with Powertel subscribers that stayed on or if it will be enough to lure back the ones that deflected to other ISPs, it does seem like a step in the right direction.

However, with services like ZOL Fibroniks coming in at $39, the market is changing rapidly and Powertel has to really ramp up its value offering. It still has to compete on aspects like the amount of data offered, coverage and the speeds, so solving the price puzzle is just one aspect to consider.