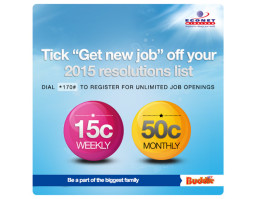 I’ve lost count of the number of times my phone goes off because of an SMS related to services like instant news, online courses and job searches. I’m an Econet subscriber so I know I’m just one of literally, millions of people getting these texts.

What did I do to deserve this annoyance? Well, it turns out I subscribed for some of these services a while ago. I remember doing that for the Job Search service around the time it was still just a trial version. Dialing *170# and following the prompts is what did the trick.

Now hang on for a second, I also remember unsubscribing from that service, so getting any messages related to job search shouldn’t be the case. I unsubscribed because I DIDN’T WANT to receive CV tips and how-tos for my next job interview. The service is great, it just isn’t something I want. I even tried to unsubscribe from the service later, but I couldn’t because I wasn’t subscribed, something that made sense because I did unsubscribe after all.

When I asked around, I found a couple of other people that have been receiving these texts, despite not wanting the service either. The queries didn’t just stop with my chums, I took it up with Econet. According to their Customer Care team (I’d advise you to use their online chat, it beats calling 111 and being on hold for a lifetime) the service has to be discontinued by the Econet team. In other words, it’s easy to sign up from your phone, but you can’t unsubscribe from the service on your own.

It doesn’t end there though. Each one of these SMS alerts cost you 1 cent. It’s just a penny, right? You probably never noticed. But it’s still your money. If you get up to 40 of these SMS alerts in one month, that’s enough to make a call, hang on to another online service for just a wee-bit longer or send your own SMSes.

I don’t know how many of Econet’s 6 million subscribers are signed up for this service, but if we were to assume that 1 million of Zimbabwe’s unemployed citizens tried the service, and they have been giving up 20 cents each to Econet every month, that’s a tidy $200,000 from people that might not want the service or even worse, don’t realise that they are contributing to a $2,4 million annual Econet slush fund. That figure is a huge part of Telecel’s total value.

Maybe it just sounds like I’m ranting because I’m annoyed by all those SMSes or because I gave up some money to an operator, but the real issue is how transparent an operator is supposed to be at the end of the day. Makes me wonder if all those complaints made every single day about Econet stealing airtime (they always blame background services and apps that use up your data) are unwarranted after all.

14 thoughts on “Econet, what’s with the SMS spam and “stealing” from me?”