Today, Liquid Telecom, launched an enterprise data storage, cloud storage and file sharing service powered  by Code 42‘s CrashPlan and SharePlan technology. Launching first in Zimbabwe and then to be expanded to other countries where Liquid has operations the services is branded CrashPlan Africa and SharePlan Africa.

Essentially, large enterprises for whom security of their files is a big deal (banks, governments and such) can use the service to either host a private cloud at their premises or use Liquid Telecom’s Cloud storage.

As for the comparison with services like Dropbox, Box and other such. CrashPlan Africa is enterprise first and built to put the security in the hands of the tech department, hence the option to have a private cloud. Appparently companies like Adobe, Expedia, Salesforce, Uber use it. Dropbox, Google Drive etc… on the other started as consumer products and are being adapted to enterprise. Plus they insist on hosting the data and this is a deal breaker to companies that prefer to not have their data in the security and privacy nightmare that is America – well, the internet.

On pricing, here’s what’s on offer: 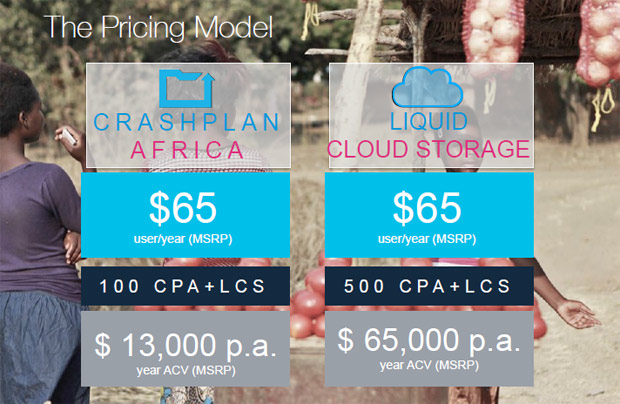 Here’s an update from Anthony Somerset, the Technical Lead on the Crashplan Africa project:

Basically at the enterprise level there is no requirement to use the Liquid Cloud storage option – you really can do all that yourself if you want to so that’s why we decouple the storage from the software license but at enterprise level you basically pay for the license and then add the storage “license” if you don’t want to run your own storage servers for the service. For enterprise there’s a minimum 100 user commit and the pricing is:
which at the minimum commit would work out at $13k per year for the 100 seats.
The home and biz packages will be bundled so there’s no decoupling of the license from the storage cost because there you will be using the Liquid Cloud Storage regardless – our pricing is still being worked on for those segments of the market but should be available very soon.

More details about the platform in the video below:

Note. If you can’t access the Code 42 website that’s apparently coz they won’t have Zimbabwean IP addresses connecting, so Tor‘s your friend.