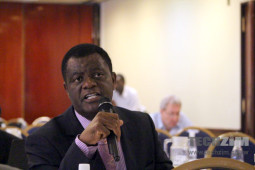 The telecoms industry in Zimbabwe was taken aback this week when suddenly, 24 executive level jobs for a mobile operator were advertised in the press. Starting the very senior position of COO, CTO, CFO down to managerial positions like Head of IT infrastructure.

The speculation began; could this be a new company preparing to take Telecel’s place. Why would Econet be restructuring when it’s performing relatively well. Why would NetOne be replacing its executives?

We need not speculate anymore. It is NetOne. Our sources confirm so.

We called the Managing Director of the company, Reward Kangai, but he said he couldn’t comment and he referred us to the board chairman, Alex Marufu. He warned however that Marufu could be out of the country. We’re yet to get in touch with him. We also tried to get a comment from Supa Mandiwanzira, the minister in charge of the tech parastatals but his phone went unanswered.

The MD’s job wasn’t advertised but that may not mean that it’s not on the line too.

The NetOne restructuring will definitely come as news of hope for those at Telecel are panicking about a jobless future, and we hear there’s quite a number of such fellows that have lost faith.