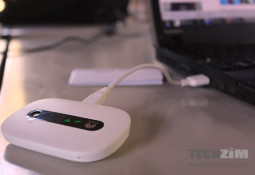 Mobile WiFi devices – MiFis they’re called – have been around locally for a while now and essentially they allow a small group of people to use as single mobile broadband line. Software achieves this too but let’s be on topic: The problem CDMA internet providers like Powertel and Africom face is that CDMA versions of these otherwise standard gadgets are hard to come by and are usually expensive – demand and supply. This week, Powertel let us test a unit they have just introduced to their range of devices.

It’s made by Huawei and a Powertel staffer tells us this so far has meant stronger signal  and a robust device – which we totally believe as we have owned and used the Huawei made GSM MiFi device that Econet sells for close for over 2 years now. Powertel’s selling this at $76 which is way cheaper than the $90 that Econet still sell theirs for. Pricing on the actual broadband service doesn’t change ofcourse – sort of unlimited broadband. However sort-of-ish the pricing gets, it can’t get uglier than we have seen in recent days.