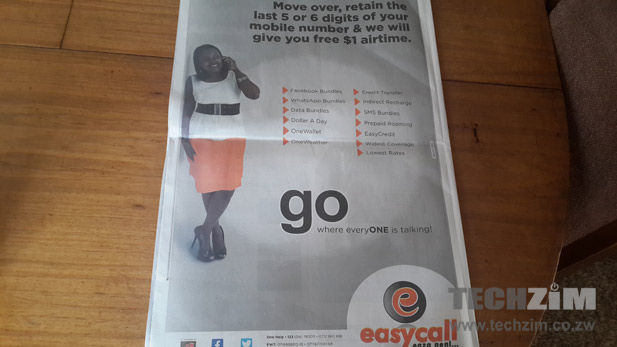 It’s only been a few days since word got out that the telecoms regulator, POTRAZ, had given Telecel, the country’s third-largest mobile operator, 30 days to shut down operations.

It didn’t come as a shock, this move had been exposed by the Minister of ICT a while ago. Another thing that’s not shocking though, is the latest promotion from NetOne, ZImbabwe’s number 2 mobile network operator.

In a print advert flighted in the Sunday Mail, NetOne is running a “Come On Over” promotion, offering new subscribers the chance to retain the last 5 or 6 digits of their number when they sign up for NetOne services. This is a number portability workaround and it’s easy to assume that NetOne just “borrowed” from the Telecel playbook. This offer comes with $1 airtime and nothing more. Incentives aren’t a priority actually.

Sure, it’s typical corporate vulture tactics. Telecel isn’t a carcass yet, in fact, it has a technical chance to appeal the cancellation of its licence. But between the announcement of its closure and the end of the month of May 2015, you can be sure that subscribers will be crossing over to either NetOne or Econet. It just depends on which one of the two offers more appeal really.

At the risk of sounding morbid, (I sympathise with Telecel) this is a smart move that deserves some applause. It looks like corporate shake-ups bring out the best in managers.

NetOne has just been the first to show the initiative here it seems. It wants to snap up the 2,1 million subscribers that Telecel has been holding on to and shedding slowly over the past year.

Other than a SIM card for 50 cents offer, (which now seems like more than just a strategy to recover some lost subscribers, Econet is a shark that had smelt blood already) there hasn’t been any deliberate courtship of Telecel subscribers from Econet.

As the only competition left for the market leader, NetOne is probably trying to get ahead of Econet in this scrapyard scurry. After all, Econet has blanketed Zimbabwe with its Eco brand and has a way more diverse product and service lineup.

NetOne on the other hand, has an ambitious $200 million target for 2015 that will be a whole lot easier to meet and exceed with just an extra 1 million customers, especially since its ARPU (average revenue per user) is likely to be strangled by Macroeconomics and limited product offers on its part.